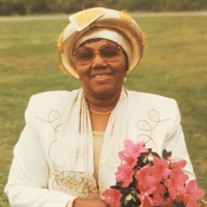 Merlin Burks, affectionately called Myrt by her family, was born to the late Mariah and Reverend Garland Black on Janurary 20, 1931. Merlin accepted Christ at an early age at James AME Zion Chapel in Eudora, Arkansas. She and her seven siblings ministered in song and she was also the church nurse. Merlin attended the Eudora public schools. The school she attended only went up to the seventh grade. Because of her love for education, she repeated the seventh grade twice. After raising her children, she obtained her GED and high school diploma on July 21, 1986. Merlin married the love of her life, the late Ivory Lee Burks, in 1947. To this union seven children were born. The second child, Verline, preceded them in death. Merlin and Ivory Lee moved to Inkster and raised their six children. Merlin worked at Advanced Nursing Home for 20+ years until she retired. Merlin loved to work in her garden, sew for her children, cook and bake sweet potato pies, seven up cakes, and other scrumptious goodies. She loved her family and hosted family gatherings at reunions and holidays where her children, her siblings, and friends would have a wonderful time fellowshipping with one another. She was very active in the community of Inkster. She worked for the Elections Commission every year, parades, basketball camps. She was a member of the Foster Grandparent program. She was also a member of the Socialettes Club for over 40 years.This club gave out benevolent funds to the bereaved and scholarships to deserving participants. They spent many hours playing PoKeno which she enjoyed. She also arranged Casino bus trips to Mt. Pleasant. Merlin became a member of Smith Chapel AME in 1966 and remained a faithful member until she passed away peacefully at home and received her wings from the Lord surrounded by her family. She was also a member of the Stewardess and Deaconess Unions, Steward and Stewardess Board, Nora F. Taylor Missionary Society and Senior Board. Smith Chapel sponsored Merlin to go to Chicago, IL to compete in the Michigan Conference where she won first place and was crowned Queen. She was also the Queen of the Queen Vesti Grand Chapter of Order of Eastern Star. Merlin leaves to cherish her memory her children: Merlin Hutson (Thelton, deceased), Ivory Burks Jr. (Etoy), Mildred Holmes (LeRoy), Jesse Burks (Hsia Hung), Rose Phelps (Eddie Jr.), Brenda Cunningham (Jerry). Her siblings: Calvin Black (Lorene), Carneal Black (Georgia), Jessie B. McClain (Paul, deceased), Arthur Black ( Alberta deceased), Marjorie and Carl Terry (deceased), Nathan Black (Pauline) and George Black. 15 grandchildren, 23 great grandchildren, 25 great great grandchildren, 3 great great great gradchildren, a host of nieces, nephews, cousins, and friends.

Merlin Burks, affectionately called Myrt by her family, was born to the late Mariah and Reverend Garland Black on Janurary 20, 1931. Merlin accepted Christ at an early age at James AME Zion Chapel in Eudora, Arkansas. She and her seven siblings... View Obituary & Service Information

The family of Merlin (Myrtle) Burks created this Life Tributes page to make it easy to share your memories.

Merlin Burks, affectionately called Myrt by her family, was born...

Send flowers to the Burks family.