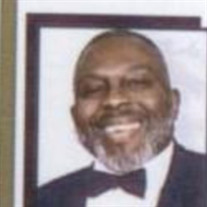 Marvin E. Newson was born June 9, 1946 in Chattanooga, Tennessee, to the late Ruth Crawford. He was the oldest of eight children, to whom preceded him in death. At the age of two, he moved to Inkster, Michigan, with his grandparents, the late Charles L. and Darnella Newson, who raised him in the nurture and admonition of the Lord. He was educated in the Inkster Public School system graduating from Inkster High School in 1963. He secured employment with the Detroit Diesel Engine Division of General Motors in Redford, Michigan in 1964. His employment was interrupted in 1966 when he was drafted into the United States Army during the Vietnam War. He served overseas and was honorably discharged in 1968. Upon returning to the states, he resumed his employment with Detroit Diesel and worked there until his retirement in 1995. However, Marvin did not stop working; he began his own lawn care service and took advantage of every opportunity to strike up a conversation and minister to others and tell of God's goodness as he cut grass. Marvin married Vinzella White in 1969, and they were blessed with two sons, Marvin Jr. and Kevin. Marvin enjoyed sports, particularly basketball. In his early years he coached his sons' basketball team and was devoted fan of the Detroit Pistons. He also loved Michael Jordan of the Chicago Bulls and watching westerns on television. Marvin wed Nadine Flowers on October 12, 1991, They enjoyed many years together spending time working together on the usher board, traveling, fellowshipping with the saints and enjoying the grandchildren. He really loved hos grandchildren and always looked forward to spending time with them. Marvin was an active member of Pentecostal Temple Church of God in Christ under the leadership of Bishop Isaac King Jr. He grew up in the church from childhood, when it was the old Harrison Street Church of God in Christ. He gave his life to the Lord and knew him as his personal savior. He enjoyed singing in the choir in his younger days. Brother Newson served as President of the Usher Board at Pentecostal Temple, in the Agape District and in the Southwest Michigan Agape Jurisdiction. He also served as the Chairman of the Pentecostal Temple Trustee Board and faithfully assisted the senior members of the church. On any given day, you would find Brother Newson working at the church. Not only did he love his church, he had a special love for his pastor and first lady, Bishop Isaac and Margaret Jewel King and the King Family. He made it his business to assist them in whatever way he could. He leaves to cherish his memory his loving wife, Nadine, two sons, Marvin Jr. (Shonda) and Kevin Newson; four grandchildren, Tyra Renee, May Lashawn, Jazmyn Erinae and Taylor Symone; two brothers, Lenton and Vernon; three sisters, Brenda Smith (Joseph), Loretta Flake (Charles), and Deborah Crawford; one brother-in-law, Jerry Flowers; two sister-in-laws, Maxine Glenn (James) and Debby Sims (Dorale); a host of nieces, nephews, cousin, and his Pentecostal Temple Church Family, other relatives and many devoted friends.

Marvin E. Newson was born June 9, 1946 in Chattanooga, Tennessee, to the late Ruth Crawford. He was the oldest of eight children, to whom preceded him in death. At the age of two, he moved to Inkster, Michigan, with his grandparents, the late... View Obituary & Service Information

The family of Marvin E. Newson Sr. created this Life Tributes page to make it easy to share your memories.

Send flowers to the Newson family.