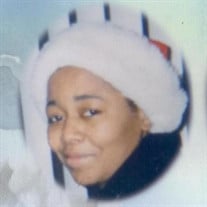 Maria Denease Pope was born in Detroit, Michigan to Alfreda Dunbar Pope and the late James Pope Jr. with a determined mind and fighting spirit. Maria received her formal education through the Detroit Public School System. She later attended Oakland County Community College where she studied and excelled in culinary arts. During her adolescence, Maria met and developed a close relationship with her childhood friend, Andre Morrison. Their relationship produced two beautiful girls that she adored, Jazzmen and Andrea Pope. Maria had numerous career endeavors throughout her life. She had an entrepreneurial spirit and hustle, which started at an early age when she sold candy out of her backpack at school. She believed in making money and her work ethic was beyond reproach. Maria lived life on her terms. If "don't start nothing, won't be nothing' was a person, it would be Maria. She faced obstacles head and with determination to see them through to the end. She spent her free time listening to music, watching her favorite movie "Uncle Buck", and coloring to relax her mind. She loved and protected her family and was especially closer to her mother and little brother James. Maria was baptized at Mt. Sion Missionary Baptist Church under the late Pastor Ralph Milhouse. Maria departed this life on Wednesday, December 22, 2021, at Providence hospital in Southfield, Michigan when the Lord called her home to rest. Maria's father, James Pope Hr., and brother James Pope III preceded her in death. Maria leaves to cherish her memory, two daughters, Jazzmen and Andrea Pope; grandchildren, Janiyah & Esther Kyles, Julian Young, and E'Yazsmin Pope, her mother, Alfreda Pope; grandmother, Mary Walker and Sallie Speller; great-great-uncle, JC Dunbar; great-great aunt Lila Hightower; sister, Ronota Holiday, nephew and niece, Emmanuel & Coco (Ena) Pearson; special l friend, Marcus Allen and a host of aunts, uncles, cousins, family, and friends,

The family of Maria D Pope created this Life Tributes page to make it easy to share your memories.

Send flowers to the Pope family.