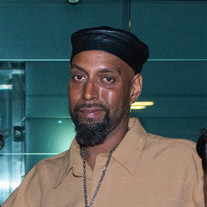 Marcus Jamal Upthegrove blessed the world with his presence on May 26, 1976, at Wayne County General Hospital in Eloise, Michigan. He was the third child born to the parentage of Pamela and Monte Upthegrove. Exactly six minutes and 36 seconds later, he was joined by his identical twin brother, Michael Lamont Upthegrove. Marcus and Michael were indeed best friends. Without hesitation, they dressed alike, talked everyday, and enjoyed life together, until Michael's untimely death in 2007. Marcus was a very bright child with many interests and talents. He was always surrounded by a loving village member who(m) cultivated his growth and desire to learn. While being educated across the four corners of Inkster, Marcus attended Inkster Head Start, Inkster Public Schools, Wayne Westland Community Schools, and Westwood Community Schools. In 1986, while a student at Carter G. Woodson Elementary school, he was recognized as the districtwide Spelling Bee Champion, representing Inkster Public Schools in the Scripps Howard Detroit Free Press Regional Spelling Bee. Likewise, Marcus also represented the City of Inkster, as part of the Inkster Metropolitan Youth Fitness Team through the Booker Dozier Recreation Complex. In 1988, Marcus and other Inkster youth were all bestowed the John J. Considine Award for their collective efforts, enthusiasm, sportsmanship, and conduct, you displayed the qualities necessary to be judged "BEST" of 45 participating communities. Marcus also regularly competed in Michigan's Hershey Track and Field statewide competition. His passion for track and field was further developed when he attended Glen Mills School in Glen Mills, Pennsylvania, where he learned and excelled at the high jump. Marcus returned to Michigan, where he attended Inkster High School and was a member of the track team. He later received his high school diploma from Westwood Community Schools. His teachers and classmates appreciated his critical thinking and sense of humor. Displaying his comedic talents, Marcus and Michael would pretend to be each other, often tricking their teachers and classmates. This always guaranteed both laughter and confusion from others, which made Marcus laugh heartily. Marcus honored his parents by emulating their respective talents and passions. Following in the footsteps of his father Monte- Marcus mastered the art of ball spinning. Additionally, he modeled his mother Pamela's love for cooking by taking extreme pride in preparing his homemade lasagna, which he perfected through the years. In similar fashion, Marcus exemplified the creative genius of his older brother Maurice. Desiring to be of further service to humanity with his vision and talents, Marcus spent countless hours writing, recording and performing hip hop music with his twin brother Michael and other local and national recording artists. Promoting excellence and brotherhood was paramount for Marcus. In 1995, he began working as a sanitation engineer with Painter & Ruthenburg, where he devoted 24 years of dedicated service to the Inkster community and surrounding areas. Marcus was a man of belief and unwavering faith. Connected to this, his spiritual journey was heavily influenced by his grandfather, Ralph Tawwab, as well as his mother and father. Marcus cherished his Book of Prayers and would regularly draw from it during times of celebration and to support family and friends during times of grief. He was a peacekeeper, a reconciler, and strived for unity within his family and the city of Inkster. Marcus was a beacon of light for many and he strived to encourage the good in the lives of those he touched. His ambitious nature allowed him to be honored and celebrated in and beyond his community. Marcus is an Inkster Legend and will be truly missed. Marcus was a majestic mentor, loyal leader, and faithful friend. His most notable role was that of a loving husband to his wife, Chanee Upthegrove. Throughout their courtship and marriage, they loved to prioritize each other. Akin to this, they also enjoyed spending time with their family by celebrating birthdays, graduations, holidays, and milestones. Together, they raised five sons, Antwon, Kevin, Brian, Andre, and Nicholas. Continuing with a rich family legacy, his sons blessed Marcus with the honor of becoming a proud grandfather. Always going above and beyond, Marcus graciously stepped up to serve as a father-figure to his niece, Nishayla when his twin brother, Michael passed away. Without question, Marcus loved his family and community. In an effort to always demonstrate an ethic of care for family and loved ones, Marcus was known for regularly calling, sending texts, visiting, and sharing positive messages on Facebook. Marcus lived an astounding and inspiring life. He departed this earth on October 15, 2019. He leaves to cherish his legacy and memories his loving and devoted wife, Chanee Upthegrove; five sons, Antwon Lynn (Sarah), Kevin Booker, Brian Lynn, Andre Lynn (Kenise), and Nicholas Williams; five grandsons, Antwon Jr., Kaden, Kevin Jr. Nixon, and Zay; five granddaughters; Amya, Kailah, Leila, Nylah, and Zahari; mother and stepfather, Pamela and Edward Smith; mother-in-love; Lenora Jones; two brothers, Maurice Upthegrove Bey and VaZhaun Johnson; two sisters, Ter-Ri Upthegrove and Tanya Upthegrove Gregory (Kevin); sister-in-love, Sherry Upshaw and Shalaunda Phillips; best friends, Burt Ford and Mike Matthews; and a host of aunts, uncles, nieces, nephews, cousins, neighbors, coworkers, and community members- all of whom knew him, loved him, and cherished his sense of humor, infectious smile and countless good deeds.

Marcus Jamal Upthegrove blessed the world with his presence on May 26, 1976, at Wayne County General Hospital in Eloise, Michigan. He was the third child born to the parentage of Pamela and Monte Upthegrove. Exactly six minutes and 36 seconds... View Obituary & Service Information

The family of Marcus J. Upthegrove created this Life Tributes page to make it easy to share your memories.

Marcus Jamal Upthegrove blessed the world with his presence on...

Send flowers to the Upthegrove family.