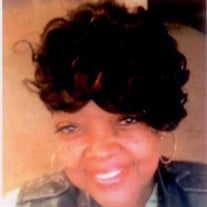 Lugenia (Willingham) Jackson was born on October 24, 1947 to Moses and Vera (Randolph) Willingham in Detroit, MI. She was the second eldest of 4 children. Lugenia attended Detroit Public Schools and graduated from Eastern High School. She decided to move her three children (Peach, Ralph, and Tasha) to Inkster and soon met and married Dorse (Jack) Jackson. The marriage turned the family into the Black Brady Bunch (3 sons; Chalres, Dean and Ralph and 3 daughters; Doris, Peach and Tasha). Dorse and Lugenia were married for 35 years they enjoyed traveling, entertaining family, feeding the neighborhood and enjoying their kids, grandkids and great great-grandkids. After graduating, she started a career in Banking and later on was hired at the Chrysler Corporation (Lynch Road Plant and later transferred to Sterling Heights Plant) where she retired after 32 years of service. After retiring from Chrysler she decided to work as a Classroom Grandparent in the Dearborn Heights School District assisting the teachers and students with small projects and providing the students with extra help. She enjoyed helping the young students and giving little tokens Easter and Christmas. She enjoyed people, especially the little ones. Lugenia accepted Christ at a very young age, she later joined Gethsemane Missionary Baptist Church in Westland, MI under the leadership of the late W.W. Davis and then under the leadership of Rev. Dr. John E. Duckworth. She served on the Senior Usher ministry until her health started to fail. On January 5,2021 Lugenia was called home to be with the Lord. She was preceded in death by her parents; Moses and Vera and your younger brother Thurman and Great-Son A-Jay. To cherish her memory she leaves behind: her husband Dorse (Jack), children; Camilla (Henry), Ralph Jr., Sakino (William), Charles, Kamilla, Sahavannah, Willow, Charles J, Mario, Brittany (Jamari), Boyce, Zion; Great-Grandchildren; Jenesis, Jamora, Jamya, Jaliyah, Jaravea Jr.; Nieces; Shakeela, Marquila and Vera; Nephews; Joseph, Jaravea, Melvin and Mario; a host of family , firends, cousins, and 2 aunts (Odessa n Winnaboro, SC and Izeta in Southfield, MI).

Lugenia (Willingham) Jackson was born on October 24, 1947 to Moses and Vera (Randolph) Willingham in Detroit, MI. She was the second eldest of 4 children. Lugenia attended Detroit Public Schools and graduated from Eastern High School. She... View Obituary & Service Information

The family of Lugenia Jackson created this Life Tributes page to make it easy to share your memories.

Send flowers to the Jackson family.