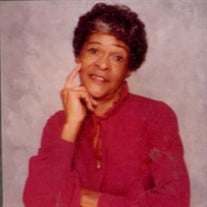 Louise Kirkland, was born July 20, 1924 in Montgomery Alabama to the late Cora and Will Esker Sanders. Louise was the oldest of seven siblings. She completed her education in the Montgomery, Alabama School System. Louise married James Williams, to this union, a daughter, Eva Mae was born. Louise worked as a seamstress for many years in Montgomery. Her work was exceptional and she continued to sew for family and friends. Years later, she married Airforce Sergeant Horace Kirkland and began a military lifestyle, which included traveling. After his retirement from Airforce, Horace and Louise settled in Columbus, Ohio. Louise had a flare for fashion and design. Her home décor was fit for the Good Housekeeping Magazine. Her style choice was straight from the runway. She took great pride in her manicured lawn and garden. She was a member of Smith Chapel Church in Columbus, Ohio and served on many committees. After the passing of her husband, she relocated to Michigan to be closer to family. Louise was a God Fearing woman. She drew people to her with love and kindness. She would say "you should e kind to everyone because you don't know who will give you your glass of water." Preceding her in death are her parents, Will Esker and Cora Sanders; siblings, Anna, Edward, Lank, Melvin, and Boulden; and husbands James Williams and Horace Kirkland. Louise leaves to celebrate her life, a loving daughter, Eva Mae Cooper of Michigan, sister Meilinee Gilliard of Texas; loving granddaughter, Renee, Lillian (Jesse) and Quinday (Kefing); grandsons, Emette (Pam), Scott (Umika), Zerick (Sylvia) and Terrance (Allison); loving great-grands, Arthur (Sharron), Keith (Nalani), Michael (LaKeith) and Terrance; great great-grands, Arthur III, Keyanti, Paige, Abrielle and Samiyah; extended family, Ann, Rhonda, Tanisha, Grace, Joyce, Tonya, Angela and MMJC Prayer Warriors. The family would like to extend a Special Blessing to : Louise's MMJC Church family and Apostles Lee and Sylvia Williams.

Louise Kirkland, was born July 20, 1924 in Montgomery Alabama to the late Cora and Will Esker Sanders. Louise was the oldest of seven siblings. She completed her education in the Montgomery, Alabama School System. Louise married James Williams,... View Obituary & Service Information

The family of Louise Kirkland created this Life Tributes page to make it easy to share your memories.

Send flowers to the Kirkland family.