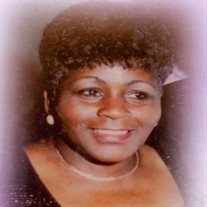 Lou Ella began her journey on February 15, 1945 in Lincolnton, GA. Her birth date, truly befitting, as she was a creation of love from her parents Josephine Simmons and George Beard Jr, both preceding her in death. Also birthed from this union were her siblings Doris Cullars (Paul), Rosie Patricia Wright (Henry), George Beard lll (Lulla), Racy Beard, Bobby Beard (Dianne) (deceased), Mary Carter (Calvin) (Deceased), Mamie Lou Sconiers (Jonathan) (Deceased). Lou, as we all affectionately called her, completed her scholastic career in Lincolnton, GA. After graduation, Lou continued her journey with a strong sense of independence and courage as she embarked on a new adventure in New York. No surprise that this style icon caught the attention and eyes of the exceptionally suave and smooth James (Pete) Vinson. It was there in Queens, New York, where the two fell in love and charted a new life together. They married on June 3, 1972 and traveled to Michigan and planted their spiritual foundation at Amity Baptist Church in Inkster MI. On December 27, 1980, God saw fit to bless Lou and Pete with the greatest blessing of all, their son Jason Ulysses Vinson. Jason was Lou and Pete’s pride and joy. She took motherhood seriously and anyone in her presence knew she was dedicated to her child’s spiritual development. The Vinson family joined Romulus Community Baptist Church and demonstrated faithful servants in multiple ministries. Brother James (Pete) Vinson preceded them in death in 2008. Lou was committed to her walk with Christ as she was member of Pastors’ Aide, the Senior Usher Board and an avid supporter and volunteer in youth auxiliaries, in which Jason was involved. She was extremely active in Jason’s educational endeavors and a wonderful support into his adulthood. Any given church Sunday, you would see Lou adorned in remarkable fashions that represented her grace and distinct style. She was a role model and example of a virtuous woman who carried so much poise and wisdom. Lou Ella demonstrated the same level of class and hard worth ethic in her career at Triple A Insurance Company. Because of her love for children after retirement she worked as a Meal Technician to ensure children were well nourished and ultimately loved. She was a mother to many. She also enjoyed gardening, watching her beloved Family Feud and celebrating important milestones of her closest loved ones. Lou’s bright and golden spirit illuminated, especially on the holidays. She stayed true to her coordinating fashions. Lou Ella leaves behind her son Jason Vinson (Sarah), a host of cousins, nieces and nephews whom she loved and cared for dearly. On May 25, 2021, this good and faithful servant’s pilgrimage took on a new adventure. This time she is flying high and marching the streets of gold as her journey has just begun, dwelling with the Lord.

Lou Ella began her journey on February 15, 1945 in Lincolnton, GA. Her birth date, truly befitting, as she was a creation of love from her parents Josephine Simmons and George Beard Jr, both preceding her in death. Also birthed from this union... View Obituary & Service Information

The family of Lou Ella Vinson created this Life Tributes page to make it easy to share your memories.

Send flowers to the Vinson family.