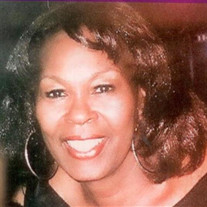 Loretta Calloway Washington, affectionately called "Aunt Lois" by her many family members and their friends, was born May 3, 1947 to the union of Sammie and Abbe Calloway in Montgomery, Alabama. She lived many years in Dover, Delaware and eventually settled in Detroit, Michigan. She departed this earthly life peacefully on December 1, 2019. She was educated in the Montgomery Alabama school system. She furthered her education at Delaware State University in Dover, Delaware Graduating with an undergraduate degree and went to obtain her Master's degree from Wayne State University in Detroit, Michigan. She was an educator in the Detroit public school system and did counseling work at several youth agencies in Detroit. She was a past Board Member of CASA-Court Appointed Special Advocates for foster children. She loved her Pastor and the members at Pilgrim Travelers Baptist Church. She was active in her church until her health started declining. However, Pilgrim Travelers continued to stay in contact with her visits, cards, and their prayers. She also had many, many close friends that she talked about and stayed in contact with over the years. She was predeceased by her parents, Sammie and Abbie Calloway, her brothers, Sammie Calloway, Richard Calloway, and her sister Lueticia Rivers. Her beloved nephew, Richard Jr., also predeceased. She leaves to celebrates her Homegoing her nieces and nephews: Sammie Hall, Ivan Calloway, Stephanie Thurmond, Abbie Calloway, Patricia Calloway and Toni Calloway. Aunt Lois was "Dear" to May Frances Zimmeraman. She leaves many great nieces and nephews and great-great nieces and nephews. She also leaves many friends and families in Rockford, Illinois, Phoenix, Arizona, Dover, Delaware, Montgomery, Alabama, and Chicago, Illinois.

Loretta Calloway Washington, affectionately called "Aunt Lois" by her many family members and their friends, was born May 3, 1947 to the union of Sammie and Abbe Calloway in Montgomery, Alabama. She lived many years in Dover, Delaware and eventually... View Obituary & Service Information

The family of Loretta Washington created this Life Tributes page to make it easy to share your memories.