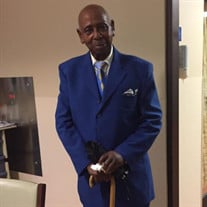 Our Hero Lonnie Kuykendall, Sr., was the eldest of three children born May 3, 1930 in Parkin, Arkansas to the late Jeff and Eva Kuykendall and was preceded in death by his two sisters, Dorothy Frost and Ida Kimbrough. The family relocated to Inkster, Michigan in 1939 where Lonnie attended the Inkster Public Schools. Lonnie confessed his life to Christ at an early age and was baptized in 1958 at Second Baptist Church under the leadership of the late Pastor Sidney L. Hampton, Sr. The church name was later changed to Cathedral of Faith under the leadership of the late Pastor Jackson Herbert Henkle and is presently under the leadership of Pastor Lee Andrew Jackson. Lonnie was a dedicated member who loved his church and faithfully served on the Usher Board ministry until his health began to fail. Lonnie met and married his soulmate, the love of his life, Sarah Josephine Johnson on November 18, 1951. They were blessed with sixty-nine years of marriage. To this union, two children were born, Jan and Lonnie, Jr. Lonnie worked for Chrysler until he retired in December of 1989. He then took a passion for bus driving with Ellis Tours and Trinity Tours. He traveled to many, many places in and out of state and met lots of prestigious people. During the time of Bill Clinton’s presidential campaign in Michigan, which began in Detroit, Ellis Tours was recommended to transport the group. Lonnie was elated to be selected as the lead driver for the caravan. This was truly an honor and a cherished moment in his life. Lonnie was definitely a people person and loved by many. His sense of humor, wisdom and humility would surely win you over. He enjoyed his casino tours, watching game shows, sports and westerns. Lonnie loved spending time with family and friends, especially his grand-children and his sisters. Lonnie leaves his cherished memories to, his loving wife, Sarah; two children, Jan Kuykendall of Red Land, California and Lonnie Kuykendall, Jr. (Teriece) of Inkster, Michigan; two grandchildren, George Kuykendall (Jira) of Arizona and Te-Lur Kuykendall of Inkster, Michigan; seven (7) great grandchildren; Khori, Taedyn, Malcom, Maleek, Denea, Daveon and Imani; two brothers-in-law, Willie Johnson (Jean) and John Johnson (Luellen), both of Muskegon, Michigan as well as a host of nieces, nephews, cousins and friends.

Our Hero Lonnie Kuykendall, Sr., was the eldest of three children born May 3, 1930 in Parkin, Arkansas to the late Jeff and Eva Kuykendall and was preceded in death by his two sisters, Dorothy Frost and Ida Kimbrough. The family relocated to... View Obituary & Service Information

The family of Lonnie Kuykendall Sr. created this Life Tributes page to make it easy to share your memories.

Our Hero
Lonnie Kuykendall, Sr., was the eldest of three children...

Send flowers to the Kuykendall family.