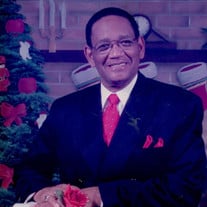 Lewis Gregory, Sr. was affectionately known as "Mr. Greg", was born in Greenwood, MS on July 21,1933 to John and Zora V. Gregory. The family moved to Murphysboro, IL when he was a toddler. Lewis was educated in the Murphysboro Public School System where he excelled in all activities. Upon graduation, Lewis served in the United States Army for three years. After an honorable discharged, Lewis moved to Chicago, IL for employment. He accepted Christ at an early age at Shiloh Baptist Church in Murphysboro, IL. In 1952, Lewis moved to Inkster, MI and married Peggy Fidler and to that union four children were born, Lewis, Jr., Aaron, Lynia, and Kelli. Lewis was employed by Ford Motor Company for 18 years. He also served as Transportation and Food Service Director for the Inkster Public School System for many years. Also served as an Administrator for the Ypsilanti, Pontiac, and Detroit Public School Systems. Lewis was a member of the Downtown Inkster Development Association, Cable Commission, committee member of the Inkster Summer Fest and the Annual Memorial Day Parade. He was a host of Inkster Lifestyle Cable Show and former president of Inkster Goodfellows. In 1978 he was introduced to the love of his life, Gloria Cobb. They shared a wonderful friendship and were united in holy matrimony October 1,1983 by the late Bishop G.D. Moore. They enjoyed many blissful years together as husband and wife. Lewis and Gloria were blessed to raise their grandchildren, Queen-Ozema Gregory, Corey Spencer and Sydney Spencer. His passion was music and excelled as premier M.C. and DJ for all occasions. Lewis was called from labor to reward on January 27, 2020 at 11:pm surrounded by his loved ones and Pastor Kellen Brooks. He was proceeded in death by his mother and father John Gregory and Zora V. Gregory, stepmother Annie Gregory, brother J.C. Gregory, sister Margaret Ann, and daughter Lynia Gregory. Here to celebrate his life and cherish his memory, his loving wife Gloria Gregory; sons, Lewis Gregory, Jr., Aaron Gregory (Arlesia); Daughters Kelli Clark, Valerie Daniels; Stepson Darryl Burrell (Sandy); Brother-in-law Bryce Cobb Sr. (Charlene); Aunt Ettarene Kerrens; Grandchildren, D'Juan, Devin, Ariel Queen-Ozema, Corey, Arlynda, Artese, Hyman, Carli Marie; Great Grandchildren (3); and a host of relatives and many many friends.

Lewis Gregory, Sr. was affectionately known as "Mr. Greg", was born in Greenwood, MS on July 21,1933 to John and Zora V. Gregory. The family moved to Murphysboro, IL when he was a toddler. Lewis was educated in the Murphysboro Public School... View Obituary & Service Information

The family of Lewis Gregory Sr created this Life Tributes page to make it easy to share your memories.

Lewis Gregory, Sr. was affectionately known as &quot;Mr. Greg&quot;, was...

Send flowers to the Gregory family.