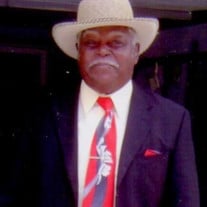 Leroy Woodson December 20, 1928 – May 18, 2020 Leroy Woodson born December 20, 1928 to Robert Henry Woodson and Johnnie Mae Walton. He was the second of 16 children. He was preceded in death by 9 siblings Robert, Marion, James, Herman, Harold, William, Joseph, Marba and Charles. He was raised in Buena Vista, Georgia. He later came north to Michigan and settled in Inkster where he resided until his death. On June 3, 1952, he married the love of his life, Ruth Mae Woodson, who preceded him in death. They were married for 47 years. To this union six children were born, Leroy Sr. and Pamela, who both also preceded him in death, Ronald, Raymond, Mark and Robert. Leroy was a wonderful husband and father. He was a hard worker, working as a construction foreman for 30+ years before retiring. He taught his children to be honest hard workers as well. Leroy loved the outdoors, fishing whenever he had the opportunity. You could often see him sitting outside his home enjoying the weather whenever possible. He also loved traveling and spending time talking and laughing with family and friends. His favorite place to visit was Buena Vista, Georgia, the place he called ‘home’. Leroy’s health declined over the past few years until he finally closed his eyes on May 18, 2020 at the age of 91. His sons and granddaughter Kandi took great care of him at home until the very end. He leaves to cherish his memory, four sons - Ronald (Lesia), Raymond (Andrea), Mark (Sheila), Robert (Diane); two brothers – Albert and Otis (Mayola); four sisters - Bernice (William) Gardner, Ethel (ST) Baker, Annie Clark, and Earlene Woodson; two sisters-in-laws Gladys Woodson and Brenda Woodson; 13 grandchildren, 11 great-grands and a host of nieces, nephews, cousins and friends. We truly look forward to the time when the words of John 5:28, 29 are fulfilled, “all those in the memorial tombs will come out” and live once again.

The family of Leroy Woodson created this Life Tributes page to make it easy to share your memories.

Send flowers to the Woodson family.