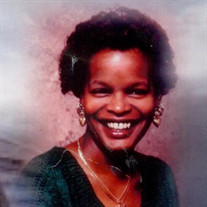 Kimberly Bradshaw was born on April 12, 1960 in Wayne, Michigan to Marva "Jackie" Bradshaw-Elliott and Robert Elliott, both preceded her in death. "Kim", as affectionately known, attended Inkster Public Schools and graduated from Inkster High School, Home of the Mighty Vikings, Class of 1978. While in school, Kim was well liked and was a member of the swim and tennis teams. In December of 1988, Kimberly celebrated the birth of her son Charles, whom she loved dearly. Kim was a very strong-willed person who didn't mind saying how she felt about anything and would stand up for anybody. Her strong personality and physical capabilities allowed her to take on many aspects of life that one could only imagine. She joined the United States Army in 1990 at the age of thirty-one and was in the 62nd Medical Unit serving the Gulf War, again showing her strength and courage to fight, which she did to the very end. Kim was also published author in which many of her writings exemplified her love of Christ and her faithfulness. She enjoyed learning. Whether it was working towards her higher education or increasing her knowledge of the Lord, she kept going. Kim achieved her BBA in Accounting from Wayne State University, which she worked tremendously hard to accomplish and was very proud to walk across the stage to receive it. She worked at many jobs throughout her life, all of which showed her strong will to complete assignments. Ford Motor Company, GM Hydramatic, Motor Wheel, but her most favorite job was as a Tax Preparer, which she kept increasing her knowledge, until late 2019, which she showed her will to keep going. Kim's greatest joy was serving the Lord, whom she loved with all, her heart and constantly spoke of how pretty he was and that she would be a testimony of faith, in which she was. Kim loved attending services at Community and the Cristian Women Leadership Classes. She was so happy to be back in the presence of her Church Home and spoke of Reverend and Sister McBurrows daily on how they made sure she was good. To Kim, there were no limits to what God would do. If she set her mind to it, it would be completed, just like her life here on earth, she completed her final job and testament of faith. She stood faithful on His word and promises until she departed this life on January 9,2020. Kim is survived by her son, Charles Wade, Austin, TX; sister, Robin Bradshaw; her brother, Darryl Elliott; aunt, Joyce Garrett; niece, Nia Talley; cousins, Deborah Bradshaw, Jacksonville, FL, Angelo Brown, Anderson, IN, Brian, Brandon and Steven Bradshaw, Jacksonville, FL and Michelle Bradshaw; very special friends, Gloria Kelow, Carol Gardener and Angela Newman-Frye and a host of relatives and friends who loved and cared for her, especially the Reverend and Sister McBurrows, Jr. and the Ladies of Romulus Community Baptist Church and the entire church family.

The family of Kimberly Bradshaw created this Life Tributes page to make it easy to share your memories.

Send flowers to the Bradshaw family.