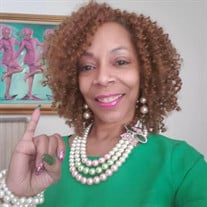 The Beginning &#8230; Kelly LaDon Smith, also known as &#8220;Kelly Kellz,&#8221; was the daughter of the late Samuel Wyles Smith and Merrill Marie Smith. She was born May 26, 1968 in Southfield, Michigan. At an early age she professed her love... View Obituary & Service Information

The family of Kelly LaDon Smith created this Life Tributes page to make it easy to share your memories.

Send flowers to the Smith family.