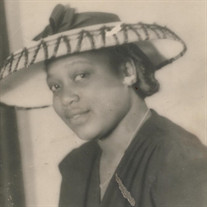 Katherine Cunningham was born November 9, 1921 to the union of the late John and Genevieve Conley in Atlanta, Georgia. Katherine along with her sister, Louise grew up and attend school in the state of Georgia. She loved her childhood which included working & playing on the family farm in Fayetteville, Georgia's countryside. She loved attending church with her family. She always spoke fondly about memories of spending time with her grandparents, uncles, aunts and many cousins in Fayetteville. Katherine was a happy and self-assured young girl growing up in Georgia. She always believed in herself and respectfully stood up for what was right.. She was always protective of her younger sister Louise as they attended Georgia's public schools. Katherine was a bright young woman who graduated from high school in Georgia. After graduating from high school Katherine met a young man named Joseph Cunningham (who preceded her in death). Joseph was a young handsome soldier who won her heart and they soon married. Katherine and Joseph would bring four children into the world. Two of the couple's children would join the Lord in infancy. Katherine and Joseph would raise a daughter, Celestine Eaddy and a son, Ronald Cunningham (who preceded her in death). Katherine and Joseph started their young family in Georgia but would soon decide to move North. The young family would live in New York City for a few years before settling down in Inkster, Michigan. In Inkster, Katherine and Joseph would purchase a house in a small community fondly named "Brick City". All the houses in this community were made of brick but most important all the families were close and looked out for each other. Katherine was very outgoing and would soon make friends with the neighbors. She believed she was an important part of the community and looked out for their neighbors. She was loved by the neighborhood children and provided a safe place for her children, grandchildren and their friends to gather. She was part of a village known as "Brick City"; preserving the community, keeping it beautiful and safe. Katherine was always a faithful Christian. When she moved to Inkster, Michigan, she joined the Amity Baptist Church under her neighbor, the late Pastor W.C. Johnson. Several years later she would become a member of Gethsemane Missionary Baptist Church under the late Pastor Willie W. Davis. Katherine was very active in the church. She was a member of the usher board and assisted with many church programs. Katherine loved working for the Lord but also being apart of a church family. She always considered herself to be an honorary member of the Amity Baptist Church attending from time to time to hear the word from her family, Pastor Anthony B. Eaddy. Katherine lived an amazing life and experienced so many historical events. She was proud to see the end of segregation and to see the first black president. She was a strong and nurturing mother, grandmother and great-grandmother. She helped provide love and guidance to her five grandchildren. She was overjoyed to see the births of six great-grandchildren. Katherine lived for and loved her family. Sadly, Katherine's young 98 years would come to an end on December 25, 2019 so that her new life with the Lord and her reunion with loved ones that preceded her could begin; Genevieve and John (her parents), Louise (her sister), Ronald (her son), her two infant children, family and friends. Katherine leaves to cherish her memory; her loving daughter; Celestine Eaddy, her grandchildren; Geneva Eaddy, Johanna Eaddy-Jones, Kimberly Cunningham, Christopher (Nina Lou) Cunningham and Marcus Cunningham, and great-grandchildren; Brianna Jones, Alana Jones, Akeira Martin, Karmen Kay Cunningham, Chloe Vanessa Cunningham, Marcus Cunningham, Jr. and a host of other family and friends.

Katherine Cunningham was born November 9, 1921 to the union of the late John and Genevieve Conley in Atlanta, Georgia. Katherine along with her sister, Louise grew up and attend school in the state of Georgia. She loved her childhood which included... View Obituary & Service Information

The family of Katherine Cunningham created this Life Tributes page to make it easy to share your memories.

Katherine Cunningham was born November 9, 1921 to the union of...

Send flowers to the Cunningham family.