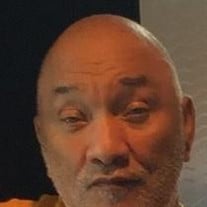 John Douglas Nobles, Jr. was born June 26,1947 in Inkster, MI, to the late John D. Nobles, Sr. and Annie B. Nobles. He was blessed to be the third of five children. John was well know as "Baybay" throughout the community, from his youth into his youth into his adult life. He always kept his family laughing by telling funny stories or playing a trick on them and with that he became a comedian in his own right. John had a way of sending you away laughing, or at least with a smile on your face. He attended the Inkster Public School System and graduated from Inkster High School in 1965. He stood out by his athletic abilities in and out of school and was well known beyond the boundary of Inkster. John graduated during the time of the Vietnam War and it wasn't long after graduating that he volunteered to fulfill his patriotic duty by joining the U.S. Army. He did two tours of duty in Vietnam and while serving he was awarded the following medals; National Defense Service Medal, Expert Rifle Medal, Republic of Vietnam Champaign Medal. Vietnam Service Medal and two Bronze Service Stars. Upon completing his service, he was given an Honorable Discharge. Upon returning to civilian life and to Inkster, he became gainfully employed by General Motors and later became an entrepreneur in his own right, well known to all. And Oh yeah, his all time favorite song was "Please Mr. Postman." John was an outgoing and active person until be became ill. Although he has his health challenges, he still had his bunny stories and jokes to tell. Even though John to his many funny stories, he took the time to acknowledge the serious side of life and eternity. He responded to the gospel and received Jesus Christ as his Savior and Lord, and with that, we rejoice and celebrate his life and legacy. John is preceded in death by his parents and his sister, Bernita Sledge. He leaves to cherish his memories, son Jonathan Nobles; daughter Bennita Stinson (Darryl); granddaughter Jada; thress grandsons, Loren, Keith and Albert; sisters Gloria Edward (Royce) and Joyce Bishop (Nathaniel Sr.); brother, George Wright (Sylvia); aunt, Verna Mattison; Ms. Barbara (Bobbi), a very, very close cousin as was as a host of nieces, nephews, cousins, and many, many wonderful loving friends.

John Douglas Nobles, Jr. was born June 26,1947 in Inkster, MI, to the late John D. Nobles, Sr. and Annie B. Nobles. He was blessed to be the third of five children. John was well know as "Baybay" throughout the community, from his youth into... View Obituary & Service Information

The family of John Douglas Nobles created this Life Tributes page to make it easy to share your memories.

Send flowers to the Nobles family.