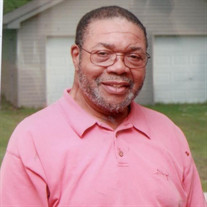 John Arthur Hobson was born on February 21, 1945, the 11th of 14th children to the parents of Rev. Nathan Hobson and Ester Phillips, in Whitfield, Mississippi. In 1948, his parents moved to Romulus, Michigan. He was educated in the Romulus School System and graduated from Romulus High School in 1964. After graduating, he was employed by Chevy Gear and Axle in Detroit, MI. John married twice in his life. His first marriage was to Laverne Harris and to this union were born Lee Anthony, Johnathan, Cheryl, Michael and Craig Hobson. His second marriage in 1980 was to Yvette Kennedy. To this union they had three children- Kevin, Bethany, and David Hobson. He was a dedicated and hard working father. He worked diligently to provide for his family as a Millwright for General Motors. John worked more than 30 years before retiring in 2005. John loved God and his church. He accepted Christ early as a youth and he was a member of various churches throughout his life. Most recently worshipping with the saints of First Baptist Church in Romulus and serving in the choir. He was a lover of people. John could always be counted on to share a rousing story and to put smiles on the faces of those that he interacted with. He truly never met a stranger. His friendly nature was only matched by his full and infectious laugh. John was a giver and would do all he could to give to those dear to him. John was a long-standing member of St. John's Lodge #44 F. & A. M., P.H.A where he developed life-long friendships and worked diligently with the youth programs. He was a car enthusiast and enjoyed car racing as a young adult as well as attending hosts of car shows and traveling to various races in and around the state including Milan, MI. John made his transition from this life at his home in Garden City on October 18, 2019. He was preceded in death by his parents, Rev. Nathan (Ester) Hobson; first wife, Laverne, second wife Yvette; brothers, Watson, and Nathan Jr., sisters, Helen, Minnette, Mary, and Lucy and his son Kevin Hobson. John leaves to cherish his memory; his sisters, Lee Anna Pearson, Betsy Butler, Shirley Russell and Belle Radzilowshi; brothers, Alvin and George Hobson, his children, Lee Anthony, Johnathan, Cheryl, Michael, Craig, Bethany and David; his grandchildren; great grandchildren, great-great grandchildren, and a host of cousins, nieces, nephews, and friends.

John Arthur Hobson was born on February 21, 1945, the 11th of 14th children to the parents of Rev. Nathan Hobson and Ester Phillips, in Whitfield, Mississippi. In 1948, his parents moved to Romulus, Michigan. He was educated in the Romulus School... View Obituary & Service Information

The family of John A. Hobson created this Life Tributes page to make it easy to share your memories.

Send flowers to the Hobson family.