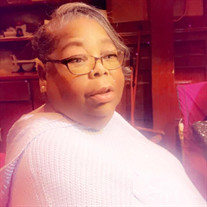 On February 8, 2022, Joann Sayles made her transition to be with the Lord. Joann was born on November 20, 1946 to the late Alfred Sayles and Laura Sayles (Ross) in Steubenville, Ohio. She was the fourth of ten children. Joann gave her life to Christ at an early age and attended Mt. Zion Baptist Church. Joann attended Steubenville Public Schools where she graduated from Steubenville High School in 1966. In 1988, Joann received an Associate of Art Degree from Wayne County Community College. She was a member of Second Church that later became Cathedral of Faith, where she served as a member of the Senior Usher Board. Joann was also a member of the Golden State Lodge (Elks) in the City of Inkster. Joann worked at Metro Airport for various companies until she retired in March of 2013. After retirement, she became active with the Senior Services Community and became a foster grandparent at one of the elementary schools, where she enjoyed being with the children. To know Joann was to love her. Her smile, laugh and knowledge would draw attention to those that she encountered. Family, both near and far, was very important to her. She loved to play bingo and sitting in her chair watching her Gunsmoke. But what she liked the most, was talking on the phone to everybody. It didn't matter if she called or you called, she's talking. She was preceded in death by her parents, Alfred and Laura Sayles; siblings, James Johnson, Vera Adams, Alfred, Paul, Gladys, and Lousie Sayles and her lifelong companion. John Butler. She leaves to cherish her memory, her loving children, Vaughn Sayles, Shalynn Hall (Khory), LaToya Sayles and her adopted son, Myron Stewart (Desiree), grandchildren, Tony, Salisa, TyeShira, Devin, LaVonda, Kyesha, Khary, Jr. and Tynyra and eleven great grandchildren. She also leaves to cherish her memory, her siblings; Shirley Sayles (CeCe), Robert Sayles (Bobby) and Ronald Sayles (Ronnie) along with a host of nieces, nephews, cousins, and friends.

On February 8, 2022, Joann Sayles made her transition to be with the Lord. Joann was born on November 20, 1946 to the late Alfred Sayles and Laura Sayles (Ross) in Steubenville, Ohio. She was the fourth of ten children. Joann gave her life... View Obituary & Service Information

The family of Joann Sayles created this Life Tributes page to make it easy to share your memories.

Send flowers to the Sayles family.