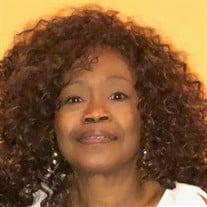 Jernell Adrena (Nelson) Wilkins known to most as "Bonnie" was the first child born to the union of the late Napoleon and Betty Jean Nelson on Easter Sunday, April 18, 1954 in Detroit, Michigan. She attended Romulus Community Schools and graduated in 1972 with a high school diploma and a cosmetology license in tow. Jernell grew up going to church. She rededicated her life to Christ and was baptized around 1980 at New Covenant Missionary Baptist Church in Ypsilanti, Michigan. While at New Covenant, she was an active member of the choir. She often led one of the choir's most requested songs at the time, "Jesus Can Work It Out!" Something she truly believed and sang with passion. Jernell was hilarious. always cracking jokes and poking fun at something or someone. She would always tell the funniest stories--with voices of course. Even if you heard them before you didn't mind hearing them again because she would still make you laugh every time. She was a tiny person in stature, but she loved to eat. She loved buffet restaurants and could eat everyone under the table! We're not sure where she put it all. It was always a running joke in the family; but she was legendary. She would often tell a story about a trip down south when the cook at the restaurant came to the table and said "they told me a lil' bitty woman out here eatin' all the food but I didn't believe it and had to come out here and see for myself!" There's no doubt the story was true! Jernell loved playing games with the neighborhood children and she was like a mother to many over the years. She loved casino trips, shopping, and playing the lottery. She could give you a number for just about anything. She was not a serious gambler, but it was a hobby that she truly enjoyed passing time with. Jernell loved cosmetology. She enjoyed hair, makeup and clothing. She used her cosmetology license to do hair at home, doing it most during the 70's and early 80's. She worked a few years at GM-AD in Willow Run. She spent several years as a stay at home mom. She spent some time pursuing a physical therapy program at WCCC. She also spent many years as a CNA. She ended her working days in a similar fashion to how it began doing packaging and light assembly work. She worked to live and did not live to work. She was most concerned about her family and always went out her way to be sure everyone had what they needed. She was a giving person who loved to have fun and she was fun to be around. Jernell departed this life on March 1, 2020 after a long but valiant Cancer battle. She was preceded in death by her parents Napoleon and Betty Jean Nelson, two younger sisters, Bettina Ajaeroh and Joslyn Buckley, her beloved daughter and grandson; Oweeta and Aaron Glegola. She leaves to mourn her husband of nearly 47 years, Otha Wilkins and 2 adoring daughters Adrena (Lamar) Crowder and Jeriesha (Jeremy) Wilkins Usry. Four adored grandchildren, Gia, Owen, Amara, and Lauryn. She also leaves beloved siblings: Napoleon (Kim) Nelson, Debra Nelson, and Delvin (Sharon) Nelson. Bernice (Robert) Finley, George Wilkins, Charlie (Nadine) Wilkins. Also a host of aunts, uncles, couisns, nieces, nephews, and friends. Her loss will leave a void in all their lives. She was very loved and will truly be missed.

Jernell Adrena (Nelson) Wilkins known to most as "Bonnie" was the first child born to the union of the late Napoleon and Betty Jean Nelson on Easter Sunday, April 18, 1954 in Detroit, Michigan. She attended Romulus Community Schools and graduated... View Obituary & Service Information

The family of Jernell Adrena(Bonnie) Wilkins created this Life Tributes page to make it easy to share your memories.

Jernell Adrena (Nelson) Wilkins known to most as &quot;Bonnie&quot; was...

Send flowers to the Wilkins family.