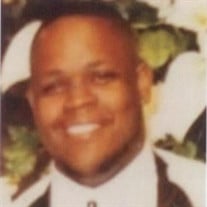 Jermaine Kenyatta Walton was born April 6, 1973, in Wayne , Michigan to Louie Walton Jr. and Rosaline (Claiborne) Walton. He was affectionately known to his family as "Kenny". Jermaine was educated in the Inkster Public Schools district during... View Obituary & Service Information

The family of Jermaine Walton created this Life Tributes page to make it easy to share your memories.

Send flowers to the Walton family.