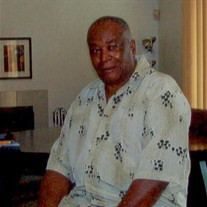 J.T. Jackson a.k.a. James Thomas Boyce w3as born on July 6, 1940 in Sardis, Mississippi, moving to Inkster, Michigan at the age of 4 months. His dad, Lovell Jackson Boyce, migrated to Michigan to seek employment and a better life for his family. He was preceded in death by his mother Hattie Jane and father Lovell, five siblings; Robert Ed, Alma, Henry, Georgella Ervin and Ethel Pride and one granddaughter Kellie. Tee Boyce, as he was affectionately known by his classmates, grew up in Cardboard City-- a place where everyone knew each other, and of which he had many fond memories. He would tell many stories over the years of the good times he and his friends, "Bay Bay" (Charles Kennedy), "Jit" (Elijah Jones), "Pie" (Charles Kirkland), and Guy Gibs, had making Hobo stew on the ditch in between Carboard City and what is now Annapolis Park. They would each contribute what they could confiscate from their mother's pantry to go into the pot. They would also sneak to the pond for a swim, but would be sure to have Vaseline to oil themselves up afterward, so they wouldn't have the telltale signs of a swim. J.T. had a love for sports, basketball being his favorite and football close behind. After graduating from Inkster High in 1959, he joined the Armed Forces on what he thought was a buddy system--that he and his best friend "Bay Bay" (Charles Kennedy), would remain together throughout their journey , but that was not the case! After basic, they were separated, never to see each other again until on the way home. His tour of duty was Europe. While in the Army, he played basketball and was known as "the jump shit artist", leading his team to a championship. He met and married Hele Prewitt after a brief courtship. Together they raised 4 children: a beloved son, Darryl Denard Jackson (who preceded him in death), Anthony, Ursula, and Joyce. He had a love for both his family and his pets, (Courtney, Behr 1, and Behr 2), that was indescribable, always placing them first. Using his G.I. Bill, J.T. attended college in the 70's and obtained his Real Estate license. For more than 30 years her worked in real estate sales, and later began purchasing HUD homes to rehab, in both Michigan and Georgia. J.T. enjoyed fishing with his friends for walleye competing to see who caught the largest and the most; although, once his friend "Bay Bay" (Charles Kennedy) passed on, he lost his desire to fish. He had a love for Jazz, with John Coltrane- My favorite Things being his favorite Jazz artist and song however, his all time-favorite was the Motown sound of The Temptations and A Song for You. His favorite card game was Bid Whist, until his wife Helen and her friend, Sonny Willingham, were known as the best! They would challenge all who were said to be the best, and win! he, Bay Bay and Sonny would spend hours playing in the basement of their homes. In later years, he even played with his godson Issac! J. T departed this life on Friday, January 10th , 2020 surrounded by love, with his wife holding his hand, and his daughters, grandchildren, sister-in-law, and niece by his side. Throughout his hospital stay, he was covered with love around the clock devoted nieces, nephews, cousins, and close friends. He leaves to cherish his memory his devoted and loving wife of 55 years, Helen Jackson, one son Anthony; two daughters Ursula (Fiance Reginald Martin) and Joye; 10 grandchildren, Danisha "Smiley" Nelson, Gabriel, Sheena and Kayla Todd, Jasmine, Tahylor and Anisha Pasley, Fabrice and Austin; great-grand children, JaQuan, Destiny, Reggie, Michael, Kamari, Dennis, Anai and Samari; sisters-in-law Jesse "Wilbur" Glover and Ivory "Bell" (Jay) Johnson; nieces Charlotte, Vicki, Katrina (fiance' Albert), Yvette (Mawuli), Melody, Lawry, (Reggie), Teri (Marqius), Stephanie, Carlettia (Cecil), and Carla (Duncan); nephews Jerome (Anita), Willie (Charming), Michael, and Stacey (Lanette); godson Issac, and goddaughter Tonya Anderson; cousins Hattie, Adel, Pat and matriarch of the Jackson-Boyce family, 100-year old cousin Berniece Gray and her daughter Beatrice; close family friend Minnie Jones, and a host of other loving family and friends.

J.T. Jackson a.k.a. James Thomas Boyce w3as born on July 6, 1940 in Sardis, Mississippi, moving to Inkster, Michigan at the age of 4 months. His dad, Lovell Jackson Boyce, migrated to Michigan to seek employment and a better life for his family.... View Obituary & Service Information

The family of James Thomas (J.T./Boyce) Jackson created this Life Tributes page to make it easy to share your memories.

Send flowers to the Jackson family.