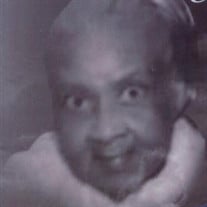 Iola Rhonette Harris-Ivory was born January 12, 1936 to John Samuel Harris and Lela Banks. She was the second of three children. She was born in Inkster, Michigan and attended Inkster Public Schools graduating from Inkster High School. She... View Obituary & Service Information

The family of Iola Ivory created this Life Tributes page to make it easy to share your memories.

Send flowers to the Ivory family.