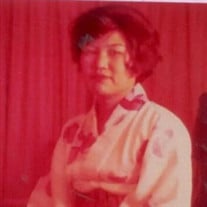 Hisako Hunt, age 93 of Detroit, Michigan passed away on Friday, August 21, 2020. Hisako was born in Hiroshima, Japan July 17, 1927. The ambitious little darling from Hiroshima who witnessed both WWII Atom bombs in Hiroshima and Nagasaki (who could say they lived with no radiation damage for 93 years after witnessing two (2) grand lifetime spectacles!), graduated with honors and worked tirelessly in the Japanese clothing industry making clothing and garments. She continued in life to transition her clothes making experience into a long professional career as an accomplished clothes designer and seamstress. In 1959, while working for the United States military she met her husband Frank Hunt Sr., as US serviceman in the Marines Corp and had two children Frank Hunt Jr. and Charlton Hunt. Hisako came to America and was an instant diva to everyone! For many years she sewed and made clothes. She showcased many of these clothes and hats always displaying her zest for life and great fashion creations at fashion shows , special events, and parties. But true to heart, she never forgot or let go of her deep-rooted Japanese traditions such as always willing to dawn her Japanese Kimono, hand fan, cherry blossom, and specialized dance in TV ands a special events. And, she never ever lost her appetite and taste for Japanese food, movies, magazines, and TV even after being in America for 60 long years! Charlton can attest to the countless times she has insisted on him taking her to eat Japanese food and watching Japanese programs only. Speaking of being an American? Hisako, Jane, or Janie as she was called was every bit of an American too. She began taking citizenship classes in the late 70's and received her official US citizenship in 1980. She was known for making her point which she could do both in English as well as Japanese. Frank recalls a time taking his mother to a Japanese performance and several of the Japanese said to her that the way she spoke broken Japanese with English with them disqualified her from being "Japanese." They said, "You're not Japanese." Well, that was a mistake. Hisako cussed them out so bad in solid Japanese, that they had to bow and say, "So sorry, so sorry...you are a true Japanese!" Her main activity was Bingo. That was her game. And her going out to restaurants and events was her thing. She was the life of the party and just a joy to be company with. She will surely be missed by everyone. Her life was a living example of Ephesians 4:32 "...and be kind and compassionate to one another, forgiving one another, just as Christ forgave you....." Hisako Hunt is survived by her two sons whom she loved dearly Frank Hunt Jr. and Charlton Hunt, Godson Mark Harden, former husband Frank Hunt Sr. and the entire Hunt family, Person family which Frank Jr. (Oneita) married into, a host of long-time friends Joanne Agee, Markita Colding, and residents of the senior citizen facility she lived at for the past 16 years.

The family of Hiskao Hunt created this Life Tributes page to make it easy to share your memories.

Hisako Hunt, age 93 of Detroit, Michigan passed away on Friday,...

Send flowers to the Hunt family.