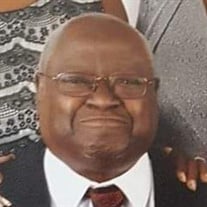 Henderson (Hank) Coleman was born in Inkster, Michigan on March 27, 1946 to the late Frances Coleman and James Carter. Henderson was educated in the Inkster Public School District and was a proud graduate of the 1964 Class of Inkster High School --The Mighty Vikings. Hank was a popular student at Inkster High and was an outstanding member of the Viking football team. After high school, Hank was employed by Detroit Diesel. Henderson was a faithful employee of 33 years until her retirement in 1998. After a couple of years of retirement, became bored, and signed on as a bus driver with Starfish Family Services. Within a couple of years, he moved up to lead bus driver. While working there he received numerous awards and accolades. He loved working with his staff as well as the little ones. Hank was an avid pinochle player. He loved his weekly Tuesday sessions with the guys. He absolutely loved water aerobics and belonged to gyms in Michigan and Nevada. He met his wife Onadette while learning how to ballroom dance, another activity he loved doing. They often rode their bikes together, walked together and enjoyed musical concerts together. Those who knew him well knew he enjoyed his food. He never met a chicken he didn't like. Henderson was a financial wizard and generously donated to many worthy causes, family and friends. Hank was always willing to offer sound financial and common-sense advice to those who requested it and those who didn't, especially to the younger generation. He accepted Christ at an early age. He attended Holy Family Catholic Church where he served as an Altar boy. As an adult he joined Middlebelt Baptist Church under the leadership of Pastor Roscoe Belton. While attending Middlebelt Baptist he served in the transportation and security ministries. Henderson married his first wife, Lula Delores Crawford at the age of 19, and to this union three children were born: Henderson Jr., Kathy, and Richard. On January 1, 2000, Hank married Onadette Ray. Within this union, Henderson acquired two more children: Raychael and Dorian. These two love birds spent the best years of their life traveling the world to Italy, Spain, Egypt, France, England, Croatia, Turkey, Greece, Central America, the Caribbean Islands, Alaska, and Hawaii. In 2014, they became "snowbirds" where they spent the winter months in Nevada and return to Michigan during the summer months. Henderson was preceded in death by his parents, his son Henderson Jr., and his granddaughter Angel. Henderson leaves to cherish his memory his beloved wife Onadette, his son Richard (Jolika), daughters Kathy, Raychael & Dorian, his brother Herbert; grandchildren; Darrell, Brandy, Henderson III, Jessica, April, DeAndre, Megan, Myra, Myron, Asha, Richard III, Layla; seven great-grandchildren; and a host of aunts, nieces, nephews, family and friends.

Henderson (Hank) Coleman was born in Inkster, Michigan on March 27, 1946 to the late Frances Coleman and James Carter. Henderson was educated in the Inkster Public School District and was a proud graduate of the 1964 Class of Inkster High School... View Obituary & Service Information

The family of Henderson Coleman Sr. created this Life Tributes page to make it easy to share your memories.

Henderson (Hank) Coleman was born in Inkster, Michigan on March...

Send flowers to the Coleman family.