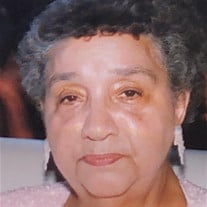 Helen Joyce Jones was the fifth child born to the union of Ruth and Aaron Jones Sr. on May 25th, 1930, in Inkster, Michigan. She attended Inkster Public Schools and graduated with honors, earning the honor of Salutatorian in 1948. After graduating from high school, Helen attended Wayne State University. Helen married Homer Otis Dotson in 1952 and he preceded her in death. She was the mother of two children, Patrick and Carol Ruth Dotson. Helen retired from the Wayne County Health Department. At an early age she joined St. Clements Episcopal Church where she served as a licensed Lay Reader. She also faithfully devoted time assisting the Day Camp Program, as well as the E.C.W. (Episcopal Church Women). She later joined Gethsemane Baptist Church in Westland, Michigan under the pastorate of Reverend Dr. John E. Duckworth. Helen is currently a member of Merriman Road Baptist Church under the pastorate of Pastor Wayne Parker. Helen was an avid reader and she especially enjoyed books written by Danielle Steele. For several years, she enjoyed daily walks in Inkster and Garden City Park with her daughter Carol, two sisters and several friends. A great source of enjoyment included swimming and getting in the hot tub at the Romulus Recreational Center. Helen also loved to travel; her travels included three trips to Hawaii, Africa, Australia, Jerusalem, Alaska, Paris, Rome, England and the list goes on. While on a cruise, Helen met a wonderful man and invited him to visit and he accepted the invitation. A bright future awaited the young man who was fortunate to be able to pursue additional educational opportunities, gain employment and later meet and marry a special young lady. He and Helen were ‘friends’ for a lifetime and his name is Gilbert Scarlett. Another very ‘special friend’ is Dorothy Gilbert of Detroit, Michigan. We all ask God for many things and Helen’s request was for long life so that she could care for her daughter, Carol Ruth. Helen was preceded in death by both of her parents, Ruth and Aaron Jones Sr., two sisters, Viola Ruth and Naomi Ellen and one brother Aaron Jr. Loving memories will forever remain in the hearts of her son Patrick and his wife, (Doris); her daughter Carol Ruth; one granddaughter Jacquelyn Monique (Jaime); great-grand son Kendale D’Angelo; great-grand daughter Kinsley Simone; and one great-great granddaughter Zahara Monet; two brothers Warren Weaver (Shirley) and Robert Francis (Cennelia); Three sisters Marian Allen, Esther Brown and Sharon Austin (Ulysses); Sister-in-law, Theola and a host of nieces, nephews and friends.

Helen Joyce Jones was the fifth child born to the union of Ruth and Aaron Jones Sr. on May 25th, 1930, in Inkster, Michigan. She attended Inkster Public Schools and graduated with honors, earning the honor of Salutatorian in 1948. After... View Obituary & Service Information

The family of Helen Dotson created this Life Tributes page to make it easy to share your memories.

Helen Joyce Jones was the fifth child born to the union of Ruth...

Send flowers to the Dotson family.