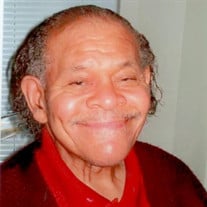 Hardie W. Daniel born in Detroit, Michigan on June 16, 1933 to the union of the late Mary A. and George W. Daniel, was an extraordinary man! Hardie or "June" as he was affectionately called by his late mom, was the oldest of two sons, his younger brother, Edward Daniel preceded him in death. Hardie was educated in the Detroit Public School System and graduated from Cooley High School. After graduation, he enlisted in the Air Force as a military officer in the 1950's and was stationed in Germany and France. Hardie learned to speak French while in France and discovered his passion and incredible ability to write poetry. While in the Air Force, he enjoyed his off days writing poetry and found it to be relaxing. Hardie also started playing table tennis while in the Air Force. Although modest about his skills, Hardie played in tournaments in Detroit (Cobo Hall), Ohio, and Ontario and has won a few trophies. In 1959, Hardie married his long-time love, Mary Jean Hill, who ironically had the same first and last name as his mon. This union was meant to be! From this union, lasting 60 years two beautiful daughters were born, Michelle and Adrienne. Mary Jean preceded him in death on November 3, 2018. After four years in the Air Force, four years in the National Guard and a few years working in the U.S. Postal Service, Hardie began his career at Sinai Hospital in Detroit as a security officer. He was a supervisor and took pride in making sure that he provided exceptional service to the hospital staff, patients, and visitors. While working at Sinai, Hardie was commissioned as colonel in the United States of American Militia, his commission certificate was signed by President Regan. Hardie worked at Sinai Grace Hospital for over 25 years until her retired in 1995. Not being one to sit still, after retirement, Hardie used his skills and worked as a security officer at Loyola Catholic High School in Detroit from 1995 to 2009. Like his years at Sinai Hospital, Hardie was well respected and took great pride in servicing the staff and students at Loyola. Hardie had a very full life, besides being a loving husband and father, Hardie was a published poet and songwriter. After discovering his passion for poetry while in the Air Force, and turning his poetry into a collection of books, ("The Love Poet" and "A Poem in Beauty") that were published and sold in local stores, Hardie was honored in 1985 with the "Golden Poet Award". With all his accomplishments in writing poetry, Hardie begin writing songs for musicians, and like his poetry, Hardie's songs were recorded by musicians and several records were produced. Dance, dance, dance, anyone who knew Hardie, knew he loved to dance! Working at Sinai Grace raised Hardie's awareness of his own health and he adopted a healthy lifestyle which included exercising. While many people choose the gym memberships or purchase exercise equipment, Hardie's exercise of choice was dance. Over the years, Hardie frequent many local Detroit Clubs where he was known to take over the dance floor. His favorite spot was Club Yesterday's. Hardie danced for years and like his poetry and song writing he became equally known for dancing too. After a lifelong journey and living such a rich life, Hardie W. Daniel dance his last dance on October 2, 2019. He leaves to cherish his memory, daughters: Michelle (Steve) and Adrienne (Edward); grandsons: Stephen, Shawn, and Chance; sister-in-law Marion Daniel, Ernestine Hill, Shirley (Donald) Glover; brother-in-law, Clyde Hill and a host of nieces, nephews, cousins, and friends.

Hardie W. Daniel born in Detroit, Michigan on June 16, 1933 to the union of the late Mary A. and George W. Daniel, was an extraordinary man! Hardie or "June" as he was affectionately called by his late mom, was the oldest of two sons, his younger... View Obituary & Service Information

The family of Hardie W. Daniel created this Life Tributes page to make it easy to share your memories.

Send flowers to the Daniel family.