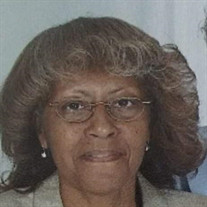 Gwendolyn Denyce DeYampert, affectionately known by family and friends as Denyce, was born on August 5, 1950 in Detroit, Michigan to Jiles and Roberta Burgines. She was the oldest of four children born to this union. Her father, Jiles Burgines and sisters Beverly Jones and Linda Lyons preceded her in death. Being grounded in the church, Gwendolyn accepted Christ at an early age at Second Baptist Church under the leadership of the late Rev. Hampton. Gwendolyn continued to nurture her relationship with Christ. Later, she joined and became an active member of Unity Baptist Church in Detroit, Michigan under the leadership of her uncle, the Late Rev. Dr. Valmon D. Stotts, where she served on the Usher Board until her health prevented her from doing so. Gwendolyn was educated in the Taylor School System and graduated in 1969. Shortly after graduating, Gwendolyn married David DeYampert Jr. In 1982 Gwendolyn moved to Kansas City, Missouri to live with her sister Beverly and Brother-in-law Earl Jones and family. While there she worked for Gulf Oil. In 1985 she accepted a job with Coca-Cola and relocated to Houston, Texas. In 2004, she returned home o help care for her mother and worked for the State of Michigan. Due to her love for people and a willingness to help others, she continued to volunteer until December 2019. Her favorite job was providing after school transportation for her great niece and nephew, Kailyn and Kelvin Steed, whom she thought of as her own, as well as two special bonus great nieces Amirah and Haleah Harris. Gwendolyn was a blessing to every life he touched. When friends and family called, Gwendolyn answered unfailingly with a helping hand, a supportive shoulder, and words of encouragement or advice. Her loss leaves a tremendous void in the lives of all who loved her, but the richness of her memory will continue to fill our hearts. Gwendolyn leaves to celebrate her life and continue her legacy; her loving mother Roberta Burgines, brother Pastor Jiles (Lola) Burgines III of Helena, AL, sisters Rev. Doris Scott of Ecorse, MI and Geraldine Moore of Detroit, MI, brother-in-law Earl (Shirley) Jones of Houston, TX., and Alan Lyons of Detroit, MI, eleven special nieces and nephews, 18 great-nieces and nephews, one great-great and two special bonus great-nieces, and a host of cousins, relatives, and friends.

Gwendolyn Denyce DeYampert, affectionately known by family and friends as Denyce, was born on August 5, 1950 in Detroit, Michigan to Jiles and Roberta Burgines. She was the oldest of four children born to this union. Her father, Jiles Burgines... View Obituary & Service Information

The family of Gwendolyn DeYampert created this Life Tributes page to make it easy to share your memories.

Send flowers to the DeYampert family.