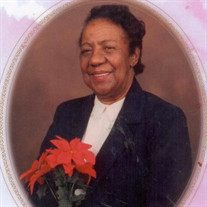 Gloria Gladys Robinson was born the third child to Nevel and Fannie Pearl Miller on August , 1923 in Detroit, Michigan. Gloria was educated in the Detroit Public School system, obtaining her diploma from Chadsey High School, Detroit, Michigan. She continued her education in the medical field at Wayne Universal College, obtaining a license as an Emergency Room Tech. She then secured a job at Wayne County General Hospital in Wayne, Michigan. When she went on to retire after 25 years. While she gainfully employed, Gloria met a rather dapper crane operator (who worked for Ford Motor Company) a Mister Rufus H. Robinson, she later joined him in holy matrimony on May 28, 1954. After about eight years of marriage they were blessed to have one child and he proved to be enough! Gloria formally attended Unity Baptist Church in Detroit, Michigan as a child. She later joined and was baptized as Gethsemane Baptist Church, under the leadership of the late Pastor Willie Davis Jr. Most recently becoming a member of Romulus Community Baptist Church under Pastor Hiram McBurrows. Gloria enjoyed fishing, sports (mainly basketball), doing crossword puzzles, cooking her favorite meals and being mom to all of the friends that Rufus could find. Be reminded that Mrs. Robinson loved her dogs, over the years you could count on her to have a dog or two or three! Gloria's journey was met with the loss of her beloved husband, Rufus, both parents Nevel and Fannie Pearl Miller, her siblings and in-laws; Warren (Blanche) Miller, Fannie Pearl (Spencer) Benbow, Antoinette (James) Anderson, Eula Mae Williams, Lillian (William) Edwards, Geraldine (James) Clark, Theresa Robinson, Claritha Robinson, Carl Robinson, and Mildred (William) Lacey, She battled cancer twice.....and won! On Monday November 25, 2019, Gloria Gladys Robinson made her transition from labor to reward. Ninety six years, three months, three weeks, and one day. Her infectious sense of humor, good ole fashion neighborly kindness will be missed by all that came in contact with her. Gloria Robinson leaves to cherish her loving memories, her dedicated and only begotten son, Rufus H. Robinson Jr., grandsons; Rufus Robinson III and Robert Wesley, one granddaughter, Terena Taylor, one great-grandson, Xavier Robinson, three in-laws; Charles (Loyce) Robinson and Dora Robinson. A host of nieces, nephews, friends and neighbors.

The family of Gloria Robinson created this Life Tributes page to make it easy to share your memories.

Gloria Gladys Robinson was born the third child to Nevel and...

Send flowers to the Robinson family.