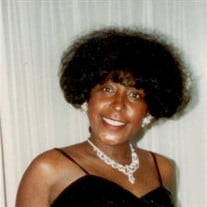 Gladys Marie Breedlove Hotfield was born to the late Samuel and Juanita Breedlove. She was the fourth child of five children. She was born on March 1, 1954 in Ypsilanti, Michigan and lived in Inkster, Michigan throughout her life. She attended Inkster Public Schools and obtained her GED from Inkster High School with her graduating class of 1972. During her school years, she was active in sports and excelled in track and field. After graduation, she worked at Detroit Diesel, Frito O'Lay and later at General Motors where she worked 25 years until her medical retirement. Her hobbies were dancing, singing, seamstress, crocheting and enjoying garage sales. Gladys was a giving person and would lend a helping hand to anyone in need. She especially welcomed and cared for her family members. Gladys accepted Christ as her personal savior at a young age and was baptized at First Missionary Church in Inkster, MI under the Late Rev. Walton. In 1974, she moved her membership to New Hope Missionary Baptist Church in Wayne, MI and served on the Young Adult Usher Board and was a member of United Choaleer's Choir. She led many songs but her favorite song was "I know God Cares for Me". In 2005, she joined New Birth Baptist Church under the Rev. Dr. Joseph A. Stephens Sr., Pastor. In 1978, Gladys married the late Trenton Manley and during their marriage they were blessed with their son Janson Louis Manley. On June 28, 1996, Gladys married the love of her life, Deacon Johnny Hotfield. During their marriage, they raised three daughters; Cassandra and Melissa Hotfield and Lanice Walker along with their son Jason. They were a family that truly believes that a family that prays together stays together. Preceding Gladys in death was her father and mother; Samuel and Juanita Breedlove, sister, Veronice Jones, brother Samuel Breedlove, mother-in-love; Pearlie Reed; sister-in-law Blachie Mott, brother-in-law's; Percy Joiner, Richard, Henry, and Eddie Reed and grandson Geovonnie Dehart. Gladys departed this life on July 22, 2019, and leaves to cherish her precious memory: her loving husband; Johnny Hotfield, son Jason Manley of Inkster, MI, daughters; Cassandra and Melissa Hotfield of Belleville, MI, Lanice Walker of Chicago, IL, sisters; Patricia Diane Eckridge of Detroit, MI and Yvonne Renee Breedlove of St. Paul, Minnesota, 14 grandchildren; Raymond, Raekwon, Kiara, Ebony, Tejhane, Kejuan, Sherell, Ervin, Mahoghny, Emaurie, Janisa, Brooklyn, Lake, and Tryston; 3 great grandchildren; Noreyae, Jordan and Kaharie, 2 uncles; William (Lula) and Dewitt Jones of Inkster, MI, 3 aunts; Taletha, Thelma and Geraldine Breedlove of Inkster, Michigan; Clarence Eckridge Jr., Nicole Marie Valentini, Kaylin Hickson, nieces, nephews and a host of cousins, relatives and friends.

Gladys Marie Breedlove Hotfield was born to the late Samuel and Juanita Breedlove. She was the fourth child of five children. She was born on March 1, 1954 in Ypsilanti, Michigan and lived in Inkster, Michigan throughout her life. She attended... View Obituary & Service Information

The family of Gladys Hotfield created this Life Tributes page to make it easy to share your memories.

Gladys Marie Breedlove Hotfield was born to the late Samuel and...

Send flowers to the Hotfield family.