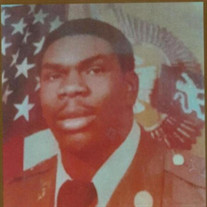 Freeman McGraw Jr., was born on April 1, 1959 in Birmingham, Alabama. He was the youngest of five children born to the late Freeman McGraw Sr. and Bettie Thomas. Freeman attended Inkster Public Schools, graduating from Inkster High in 1977. After graduation, he enlisted and served eight years in the United States Army. Upon his discharge, he moved to Kansas City, Missouri, where he lived until April of this year, when he moved back to Inkster, Michigan to be closer to his family. Freeman loved baseball, basketball, fishing, and peanut butter and jelly sandwiches. He was a big-rig driver and travelled all over the United States. When he was close to home during any holiday, he would always visit so he could her some good food. I often reflect back on the many times we would talk on the phone for hours and how we would have so much fun when you and Randy got together, the two of you were always he life of the party, because you believed in living life to the fullest. Freeman is survived by his children, Freeman McGraw III, Frene McGraw and Isaiah McGraw; two grandchildren, Hunter McGraw and Aniyah Brooks; his mother Bettie Thomas; siblings, Ella Marbury, Kathleen Wilson, Delores Booker and Randy McGraw as well as a host of uncles, aunts, nieces, nephews, cousins, and of course all of his life long friends.

The family of Freeman McGraw II created this Life Tributes page to make it easy to share your memories.

Send flowers to the McGraw family.