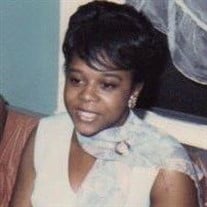 Florida Louise Reid was born to the late Bedie Guess Wade and Anderson Wade, Sr. on November 24, 1935 in Proctor, Arkansas. She was the third of ten children (eight of whom preceded her in death): Winston, Vergia, Roy, Carbin, Herman, Lottie, Jerry, and Calvin. Florida graduated from Inkster High School in Inkster, Michigan in 1954. She would later earn a diploma in Business Technology from The National Education Center. In 1957, Florida united in holy matrimony to her high school sweetheart, Wilbert Reid (preceded her in death). To this union, three children were born: Wayne (preceded her in death), Deborah, and David. Florida’s professional career had three major themes. She worked in retail, as a seamstress, and ended her career as a dedicated employee of General Motors from which she retired in 2000. In her leisure time, she enjoyed being with her family, cooking, sewing, making crafts of various kinds, studying her Bible, and traveling to Christ-centered conferences. She accepted Christ and was baptized at an early age. One of the highlights of her life was serving the Lord with her church family at Pentecostal Temple Church of God in Christ where she was a faithful member for well over 50 years. At Pentecostal Temple, Florida was both servant and leader in many capacities for several decades. She served as former President of both the Gospel Outreach Choir and the Sewing Circle. With Artistic Fingers she was active both locally and with the Southwest Agape jurisdiction. She was a member of Young Women’s Christian Council, Nurse’s Guild, Helping Hands ministry, Encouragers outreach program, Christian Women’s Council, the Mother’s Board, and participated in many other acts of service. On February 13, 2020, Florida made her journey to be with the Lord while resting peacefully surrounded by her son and daughter. She leaves to cherish her memories, one daughter, Deborah; one son, David (Annie); two grandchildren, Ryan and Rachel; a daughter-in-law, LaZandra; one brother, Anderson, and a host of loving nieces, nephews, cousins, and friends.

Florida Louise Reid was born to the late Bedie Guess Wade and Anderson Wade, Sr. on November 24, 1935 in Proctor, Arkansas. She was the third of ten children (eight of whom preceded her in death): Winston, Vergia, Roy, Carbin, Herman, Lottie,... View Obituary & Service Information

The family of Florida Louise Reid created this Life Tributes page to make it easy to share your memories.

Florida Louise Reid was born to the late Bedie Guess Wade and...

Send flowers to the Reid family.