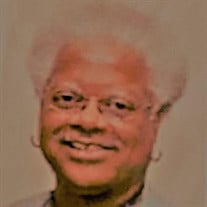 On August 10, 2021, Ezzie LaVerne Brewer said goodbye to earth and greeted Heaven with rejoicing. Her life journey which began on December 26,1942 on a family farm in Florence, Alabama ended at Regency Health Center in Ann Arbor, Michigan after an accidental fall. She was the daughter of William and Margaret (Todd) Brewer and the sibling of Edward, Evelyn, William, Robert and Oveta who affectionately tagged her with the nickname” Noote”. At the age of five, she moved to Elkville, Illinois to live with her grandmother, Blanche (” BYE-E”) and “Pops”. Between grandparents and her extended stays in Alabama with her parents and great grandmother, she was nurtured with love and reared to be a caring, religious individual. After graduation in 1960 from Elkville Community High School, LaVerne continued her journey to Westland, Michigan to reside with her cousin, Anita Smith Cobb and her family. In addition to being a babysitter to the Cobb children, she attended Lewis Business College in Detroit where she earned an Associate degree in Business. However, LaVerne’s calling was not found in the business world but in the world of health care. In 1963, she gained employment at the University of Michigan Hospital in Ann Arbor and began a very rewarding career as an assistant in the critical care unit. For years, she lovingly cared for patients who appreciated her professional service, tender attention, and infectious humor. After retiring in 2004, she was asked to return to UM as a nursing attendant in the specialized burn center. Additional years were spent dispersing expert care and cheer to burn victims who were ill and often depressed. At an early age, LaVerne was baptized at Bethel AME Church in Elkville where she sang in the choir. She also served in youth activities at Mt. Zion AME Church in Florence. After moving to Michigan, she affiliated with the Mission/ Pilgrim Travelers M.B Church in Inkster, For more than 50 years she diligently served God and ministered to others through her work on the Nurse’s Aide and Women’s Guild. She was especially known for her delicious dishes such as peach cobbler that she prepared for church events. Her Christian friends, both at her home church in Alabama and Michigan- were reservoirs of faith that greatly sustained her during her decline in health. Always concerned, compassionate, conscientious, and caring. LaVerne reached out to all with whom she came in contact. Although she had no children, she endeared herself to young nieces, nephews, cousins, neighbors, and friends. She became a staunch supporter, guidance counselor, close friend and more like a second mother to the Brewers, Cobbs, Bishops, Newmans, Dixons, Wimberlys and Mitchells. She was a true “people person” who never met a stranger. Whether in a grocery checkout or outdoor picnic, she talked and laughed with others. Whatever her role, she gave it ger best. The mortal life of Ezzie LaVerne Brewer ended victoriously when she entered eternity to dwell with her Lord and Savior who she greatly loved and devoutly served. May her soul rest in peace She is preceded in death by many who impacted her life--her parents; grandparents, Wesley and Blanche Tennant and Otto and Elizabeth Thompson; great-grandparents. Jim and Nellie Todd and brother, William. She leaves to cherish her memory-sisters, Evelyn Wills, Oveta Simmons and Elaine (John) Lewis; brothers, Edward (Faye)Brewer and Robert (Allean)Brewer; nieces, Paula Wills, Marsha Pitt, Donna Sales, Tracey Wills, Shironda Phillips and Tonya Owens; nephews, Kenneth Brewer, Jeremy Brewer, William Robertson, Daryl Brewer, Victor Calloway, Rashad Brewer, Robert Brewer jr., Jonathan Brewer, Craig Brewer, Quinton Simmons and Jacob Simmons; Sister-in- law, Patricia Brewer; Special adopted family/friend, Mrs. Dorothy Bishop and close friends, Renee Gordon and Hezzie Brannon. A host of cousins, neighbors, church members and friends will also miss her dearly.

On August 10, 2021, Ezzie LaVerne Brewer said goodbye to earth and greeted Heaven with rejoicing. Her life journey which began on December 26,1942 on a family farm in Florence, Alabama ended at Regency Health Center in Ann Arbor, Michigan after... View Obituary & Service Information

The family of Ezzie L. Brewer created this Life Tributes page to make it easy to share your memories.

Send flowers to the Brewer family.