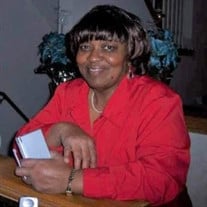 Evelyn Jean (Johnson) Davis was born September 13, 1941 in Florence, South Carolina to the late Cinnie and Evangelist-Missionary, MOther Lula Mae Johnson, Evelyn wasthe eldest of eight children; two girls (Mary and Beulah), five boys (Cinnie Jr., Ronald, Samuel, Thomas and Daniel). Cinnie Jr., Ronald, Samuel and Daniel preceded her in death. During her youth, her family relocated to Detroit and then Inkster to firmly establish their roots. Evelyn stated her primary education with the Inkster School District and graduated from Inkster High School in 1959. Evelyn continued her education at Wayne State University, where she obtained her Associated Degree in Business. Evelyn was joined in Holy Matrimony to the late Edward Davis Jr. on May 27,1967 by the late Bishop Isaac King Jr. Evelyn and Edward Jr. were together 40 years and 7 months when Edward Jr. went home to be the Lord. Evelyn actively responded to the Lord's calling on her life. She heard the Spirit of God and believed and repented of her sins and confessed that God raised our Lord Jesus from the dead. After confessing her sins, Evelyn began baptized and received the gift of the Holy Ghost, in 1957 at the age of 16. Evelyn began to dedicate her service and membership to former Harrison Street Church of God in Christ (presently known as Pentecostal Temple Church of God in Christ) under the pastorage of the late Elder W.C. Cook. Evelyn continued to worship and serve under the late Bishop Isaac King Jr. from 1960-2015. In 2015, GOD blesses Evelyn to witness the affirmation of Elder Kellen Brooks as Pastor. During Evelyn's 64 years of faithful service in the church, she has served in countless ways and on various auxiliaries such as; The Prayer and Bible Band, Nurse Guild, Sunday School, Monday Morning Prayer, and numerous home prayer groups, prison and nursing outreach programs. Regardless of the time, day or night, Mother Davis would provide intercessory prayer to those in need. She modeled the true characteristics of servitude; devoted her life to serving God and others. Evelyn was proceeded in death by her husband, Edward Davis Jr; her parents Cinnie and Evangelist-Missionary, Mother Lula Mae Johnson; and her brothers Cinnie Jr., Ronald, Samuel and Daniel. Evelyn is survived and cherished by her two daughters; Terri Lynette, Tawnya Latease; two sons; Michael Edward, Brian Keith., three siblings: Mary Green, Beulah Morris, Thomas & Rosita Johnson; an uncle and aunt, many nieces

The family of Evelyn Jean Davis created this Life Tributes page to make it easy to share your memories.

Send flowers to the Davis family.