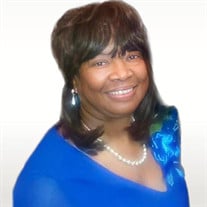 “And the time of my departure is at hand. I have fought a good fight, I have finished my course, I have kept the faith: The Lord is my Shepherd; I shall not want; and I will dwell in the house of the Lord forever.” II Timothy 4:6 and 7; Psalms 23:1 and 6 A Time to Be Born Ethel Pree Jones was born September 16, 1947 in Fayette, MS to the late Josie Mae “Lil Girl” Pree and Lloyd Pree, who proceeded her in death. A Time to Live Ethel had a smile that could light up a room and a heart large enough to fill a room. She confessed Christ and accepted Him as her personal savior at an early age and joined Locust Grove Baptist Church in Fayette, MS. After moving to Detroit, MI, she became a devoted member of Palestine Missionary Baptist Church under the leadership of Reverend Dr. Samuel Ward, Jr. and later joined Fellowship Chapel under the leadership of Reverend Dr. Wendell Anthony, where she remained a faithful member until her death. Ethel received her formal education through Jefferson County School District in Fayette, MS where she graduated in the class of 1966 from Liddell High School. She went on to attend and graduate from Jackson State University in Jackson, MS with a bachelors’ degree in English Education. While enrolled at Jackson State University, Ethel was present during the historical moment when the Mississippi State Troopers shot into the campus’s dormitories. Ethel also received a Masters’ degree in English Education from Wayne State University in Detroit, MI. Ethel retired from the education profession in 2009, as a dedicated English teacher with over forty years of experience. During her tenure as an English teacher, she worked at Von Steuben Middle School and Thomas M. Cooley High School, both in Detroit, MI. Ethel entered into retirement on the same day as her husband, MacArthur Jones, in October 2009. In 1970, Ethel was united in holy matrimony with Mac Arthur Jones and was blessed with two beautiful children: Chairice L. Jones (deceased) and Sean M. Jones of Redford, MI. Ethel greeted everyone she met with open arms and a huge smile. She was a loving and dedicated wife, mother, and aunt who loved her family unconditionally. She loved to talk and would strike up a conversation with just about anyone. She loved sports and attended all of her son’s baseball and basketball games, as well as attended all football games that her husband coached. The love and support that she showed towards her family was unmatched. A Time for Us to Mourn On Tuesday, February 09, 2021, at the age of 73, the appointed time for Ethel came to a gentle and peaceful close. Ethel was proceeded in death by her parents, Josie Mae Pree and Llyod Pree and her daughter, Chairice LaPree Jones: two (2) brothers Solomon (Clara) James, Sr. and James Henry Pree. Left to cherish her beautiful memories are her husband of over 50 years, Mac Arthur Jones of Farmington Hills, MI; her son, Sean M. Jones of Redford, MI; one sister, Barbara P. Lewis of Killeen, TX; her grandchildren in love, Monet and Markie of Redford, MI; and a host of aunts, uncles, nieces, nephews, cousins and other family members and friends who loved her dearly

&#8220;And the time of my departure is at hand. I have fought a good fight, I have finished my course, I have kept the faith: The Lord is my Shepherd; I shall not want; and I will dwell in the house of the Lord forever.&#8221; II Timothy 4:6... View Obituary & Service Information

The family of Ethel Jones created this Life Tributes page to make it easy to share your memories.

“And the time of my departure is at hand. I have fought a good...