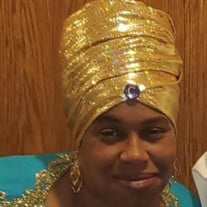 I entered the world on October 30,1972, in Ann Arbor, Michigan. My parents are Norman Dooley and Jaquilin Porter. A short time later, my brother, Steven Anthony “Tony” Dooley, was born. We resided in Ypsilanti, Michigan for a few years before moving to Westland. My mother met and later married Christopher Young (2011), then my second brother, Christian Armand Young, entered the world. I was finally blessed with a sister, Africa Schaumann, in 1994. We lived in Romulus for a few years before moving to Inkster in 1985. Growing up, my early interest were drawing, fashion, and numbers, as well as later gaining interest in the pharmaceutical industry. I attended Wayne-Westland Schools and graduated from Wayne Memorial High School in 1990. After graduating, I enrolled in Henry Ford Community College where I received my Associate’s Degree. I later attended Baker College and obtained my Bachelor’s Degree in Finance (2011) and my Master’s Degree in Finance 2014. In the fall of 1998, I met Marlo Brown. Within our relationship, first JaQuan joined our family, and then we had our first set of twin boys, Eric and Darius, in April 2003; and in January 2008, we had our second set of twin boys, Taj and Tariq. During my career, I held positions at the Department of Veteran Affairs and the U.S. Fish and Wildlife Service. However, my ongoing passion for numbers eventually let me to start my own company EDTT Financial Advisory, LLC. In addition, I stated Eryca’s Confections to fuel my creative side and love for baking. With an avid interest in art, I created collages and loved attending spoken word events. I loved learned about history, business, current events, ethics and traveling; especially traveling with the boys. My favorite R&B song was “AS” by Stevie Wonder, my favorite hip-hop duo was Eric B & Rakim, my favorite entertainer was Michael Jackson, and my favorite album was “Rhythm Nation 1814” by Janet Jackson. Some of my favorite books were “The 48 Laws of Power” by Robert Greene, “Mom & Me & Mom” by Maya Angelou, Rich Dad, Poor Dad” by Robert Kiyoskai and Sharon Lechter, and any financial publication. Although I grew up attending Smith Chapel AME, I later proclaimed my nationality with the Moorish Science Temple of America, Temple #25, in the fall of 1997. My brother Mack Willis introduced me the teachings of the temple, and it had a profound effect on me as a person and the way that I lived my life. I was a devoted member and cooked my broccoli, chicken and cheese casserole for several events, as well as a variety of cakes. Some of my greatest influences on my life, departed before me. They were: my grandparents Sara and James Porter, George and Jean Dooley; my second father Christopher Young; my aunt Janice Lyles, uncles James Epps and Dean Cook, and my cousin Tracy Porter. Of all things I have accomplished, I am most proud of my sons Eric, Darius, Taj, Tariq and JaQuan (Rajana’i) my siblings Tony (Nicky) Dooley, Christian (Antoinette) Young and Africa Schaumann; my grandchildren; Naja’I, JaQuan Jr., and JayCeon and my nephews: Anthony, Maleke and Antonio Dooley. I am also survived by a plethora of aunts, uncles, cousins, and friends. I had a very special bond with my sister, Imana Minard-El and a special relationship with the Gucci Girls: Undra Adams, Joye Jackson, Velena Stephens, Toyia Armour, Ericka Farr and Stacy Lewis. To my four young men, my love will live within you forever.

I entered the world on October 30,1972, in Ann Arbor, Michigan. My parents are Norman Dooley and Jaquilin Porter. A short time later, my brother, Steven Anthony &#8220;Tony&#8221; Dooley, was born. We resided in Ypsilanti, Michigan for a... View Obituary & Service Information

The family of Eryca LeShawne Porter-Bey created this Life Tributes page to make it easy to share your memories.

Send flowers to the Porter-Bey family.