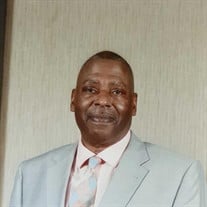 Elwinn Raydell Walker, called Al by his family and close friends was born July 15, 1956 to the late Elliott and Jeffie Mae Walker in Chicago, Illinois. The Walker family moved to Inkster, Michigan where he began his early religious instruction at Pentecostal Temple. Elwinn attended Inkster Public Schools where he was active in athletics. He graduated in 1974 and briefly attended Grand Valley State University afterward. Elwinn met is lifelong partner & wife Allison (Webb) Walker and began to establish their life together raising four children. He enjoyed family life balancing his time between his employment with University of Michigan Dearborn (where he worked until his early retirement) and his enjoyment of chess or cards. Elwinn also loved all sports, especially University of Michigan football, which he shared with his children. Elwinn and his family attended Inkster Assembly of Go, where he was baptized. His presence and personality could be felt by all who knew him and his faith in God never faltered. He carried the roles of father, brother and uncle with love and responsibility. His greatest love was for his family and everyone could count on him to provide love and instruction. During his illness he guided his family behind the scenes and was always there to support, encourage, and instruct. On June 9, 2020 Elwinn made his transition from life onto eternity. He is preceded in death by his parents Elliot and Jeffie Mae Walker, sisters Phyllis, Mable Earnestine and Karnektia, brothers Elliott Jr., Daniel, Ezekiel, and nephew Tyrell. He leaves to cherish his memory his lifelong partner & wife Allison along with three daughters; Phylicia & Karnektia Walker, Jasmine Washington (Michael), & son Elwinn Walker II. He also leaves his brother Melvin Walker (Lisa), sister Dyeniece Bohannon (Jerry), mother in law Gwendolyn Webb, brothers in law Alvin Webb (Tracy), Anthony Webb (Chaunita) and sister in law Delora Franklin. He will be missed by his beloved nephews, nieces, and rest of his family, along with a host of friends.

Elwinn Raydell Walker, called Al by his family and close friends was born July 15, 1956 to the late Elliott and Jeffie Mae Walker in Chicago, Illinois. The Walker family moved to Inkster, Michigan where he began his early religious instruction... View Obituary & Service Information

The family of Elwinn Raydell Walker created this Life Tributes page to make it easy to share your memories.

Send flowers to the Walker family.