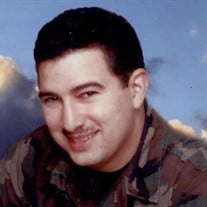 Edelmiro Stephen Urquhard was born June 26,1968 in East Meadow, New York. He was given his nickname "Dino" by his grandmother Mary Urquhart when he was a toddler, which came from his favorite cartoon character on "The Flintstones." His family called him "Dino" and his friends and associates called him "Ed." Dino accepted Christ at an early age, and was raised in a Christian family. Dino attended Romulus Public Schools. While in high school, Dino joined the Junior ROTC and participated in wrestling and football. He also had a band group with some of his classmates, which he played guitar. He graduated from Romulus High School in 1986. After high school, Dino joined the United States Airforce on May 27, 1987, where he received several military decorations for his service: He was awarded an Air Force Achievement Medal, an Air Force Longevity Service Award, an Air Force Training Ribbon, an Air Force Overseas Long Tour Ribbon, and the National Defense Service Medal. He was employed with ExpressJet for 19 years as an Aircraft Inspector. He was a dedicated employee and admired by his co-workers. Edelmiro Urquhart was joined in holy matrimony with Clara Esmondo Madrinan on September 4,1993. They met in 1991 while he served in Okinawa, Japan. He described their relationship as "love at first sight." They were blessed to see 26 years of marriage. His favorite hobbies were collecting coins, reading books, computer gaming, and playing cards. He enjoyed spending most of his time with his wife Clara "Rizza" Urquhart, his Patrick, and his dog Rino. Edelmiro "Dino" Urquhart departed this life on August 10,2020. He was preceded by his cat, Patrick. He leaves to cherish is memories: his wife Clara "Rizza" Urquhart; dog Rino; parents Janice and John Barden; siblings Gina Barden, and Quaylynn (Brian)Stovall; nieces Andrianna Barden, Miyona Barden-Clark and Jade Stovall; nephews Miyon Clark, John Barden-Clark, and Brian Stovall; and a host of aunts, uncles, cousins and friends.

Edelmiro Stephen Urquhard was born June 26,1968 in East Meadow, New York. He was given his nickname "Dino" by his grandmother Mary Urquhart when he was a toddler, which came from his favorite cartoon character on "The Flintstones." His family... View Obituary & Service Information

The family of Edelmiro Stephen Urquhart created this Life Tributes page to make it easy to share your memories.

Send flowers to the Urquhart family.