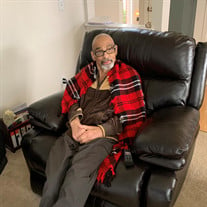 Duane Hixon's legacy began on October 7,1951 in Ypsilanti, Michigan, born to Willis Sr. and Elizabeth Hixon. He attended Dearborn Public Schools. Duane met his soon be beautiful bride, Pamela Wolfork in 1975. They celebrated their endless love in June of 1976. Of their total 45 yrs of marriage 3 beautiful children to this union, each reflecting combined personalities of their parents. As a young man, he attended Pine Grove Missionary Church. In February of 2007 he joined Romulus Community Baptist Church, confessing his love for Christ. Duane was known for his humor. Upon his confession to Christ he told the congregation that his wife will still attend Pine Grove, and assured his new church that she would eventually join him. In February of the same year, they both completed the new members' class. To add to this union his greatest companion...the family pet, Snowball. Duane was a great provider and protector of his family and trained Snowball to cover his family in his absence. Duane was proudly employed at Ford Motor Company for 32 years. He retired in June of 2008. After retirement he birthed life to his dream of becoming an entrepreneur. He started his business, DHH Janitorial Service. A labor of love, Duane was affectional known as "Mr. Clean". Duane volunteered faithfully to his church, assuring that the church would sparkle in cleanliness on Sunday morning. He later took another volunteered position in the transportation ministry. For those who rode on that bus knew Duane was prompt. If you arrived late, he reminded them of his scheduled arrival time. He served both duties with exceptional perfection, until his health began to fail him. Duane and Pam loved planning vacations with their family. His greatest passion for swimming would become the deciding factor where they vacationed. As a daring swimmer he challenged some of the deepest waters, sometimes at the risk of his life. Duane loved what he loved. There were many, many celebrations at the Hixon home. Many family and friends would gather with the expectations of having lots of fun, food and very memorable time. Of course they party started on time. However after the party his routine would be to get out his favorite bucket, favorite mop, cleaning equipment, get on his knees and start cleaning the beautiful, black granite kitchen floor. Duane was preceded in death by both of his parents, Willis Sr. and Elizabeth Hixon. Two brothers, Willis Jr., and Anthony Hixon. He leaved to cherish is memory, an adorable, loving and faithful with Pamela Hixon, 3 very devoted children, Maurice Hixon (Dawn) of Sterling Hts.,MI, Mario Hixon of Canton, MI., Marcia Faith, of Belleville, MI; 2 brothers Gary Hixon, of Wayne MI, Brian Hixon of California, and 1 sister, Karen Hixon-Taylor of California, 2 sister-in-laws Valerie Thompson (Roger) of Romulus MI., Toni Jackson of Monroe, MI. 2 brother-in-laws; Lloyd Woolfolk Jr. of Inkster, MI Terrence Woolfolk (Vernisha) of West Bloomfield, MI 3 delightful grandchildren, Amaria Hixon, Amarion Hixon and Alaysha Hixon. A host of nieces, nephews, great niece, and 2 great nephews. A very special brother/friend William (Will) Carter. And a host of friends.

The family of Duane Henry Hixon created this Life Tributes page to make it easy to share your memories.

Send flowers to the Hixon family.