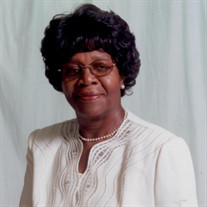 Dorothy Humphrey, affectionately known as great-grandma Dorothy, was born to Williams Henry McCrarey and Ella Mae Edwards on March 24, 1934 in Chattanooga, TN. She was a happy child with a father who was an entrepreneur in the 1930s owning a snow cone stand, and driving his own truck where he hauled and delivered fire wood to various communities in Chattanooga. Dorothy graduated from Howard High, Chattanooga in 1953. Shortly after high school, she fell in love with Robert Neil and to that union, Vivian Theresa was born. Dorothy was quite ambitious and worked two jobs as a restaurant server and domestic worker for various companies and people within the community. As a server, she encountered members of the infamous Civil Rights "Lunch Counter Boycott" movement in the 1960s. When asked by her supervisor as the protestors sat around the lunch counter, "What should we do with them?" Dorothy answered "Serve 'em." And he did. That monumental boycott in American History is one that she would never forget. Dorothy married Nathaniel Humphrey and moved to Brooklyn, New York where the late great Bishop Huie L. Rogers was pastoring at the historic Bible Way Church. Upon attending his church, she dedicated her life to Christ and received the precious gifts of the Holy Spirit and became a born again Christian. However, it was not until they arrived in Inkster, Michigan that they discovered Bethlehem Temple and Great Faith Ministries, International. Upon arriving in Inkster, Dorothy worked as a dietitian for Eloise Hospital a.k.a Wayne County in the food service division for over 30 years. Her hard work paid off as se began to enjoy life as a retire. Dorothy enjoyed gardening and learning new things. Her manicured lawn with well-kept blossoms of lilies, tulips, marigolds and other flowers made her extremely happy Her lawn was the envy of the neighborhood on Fox Street---thanks to her son-in-love Ray. While taking computer classes with her sister Rosa at age 62, they became acquainted with the internet. In her opinion, this was a big deal for both of them. Dorothy was also a Westland Walker. Dorothy devoted her life to the church and things of God as she followed the Great Faith Ministries from Inkster to Detroit. Under the leadership of Apostle Wayne T. Jackson and Pastor Beverly Y. Jackson, she was elevated as leader of the Mothers' Board. A position and honor that was taken very seriously as she loved her Mothers' Board and Pastors. Dorothy loved and adored her Great Faith Ministries International church family, Apostle Wayne T. Jackson, Pastor Beverly Y Jackson, and her special friends on the Mothers' Board. Dorothy is preceded in death by two brothers, Norman McCrarey, Matthew Murphy Sr., and one sister, Helen Beavers (Cartersville, GA). Dorothy leaves to cherish in her memory; an adoring daughter, Vivian Theresa Johnson (Ray) of Canton. Two exceptional grandsons, Dion Johnson (Pam) of Westland and Derek Johnson of Canton. Special nieces and nephews: Karen Hampton of Southfield, MI; Wallace Murphy Jr., Detroit, Charlie Dan Beavers (Lillian), Matthew Beavers (Shelia), Hattie McClure, Carolyn Crawford, Dorothy Dodd (Douglas)--all of Carterville, GA. Two beautiful great-grandchildren, Jaylen and Gianna Johnson.

Dorothy Humphrey, affectionately known as great-grandma Dorothy, was born to Williams Henry McCrarey and Ella Mae Edwards on March 24, 1934 in Chattanooga, TN. She was a happy child with a father who was an entrepreneur in the 1930s owning a... View Obituary & Service Information

The family of Dorothy Humphrey created this Life Tributes page to make it easy to share your memories.

Send flowers to the Humphrey family.