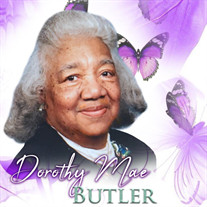 Dorothy Mae Williams was born on May 19, 1924 in Stamping Ground, Kentucky, to the parents of Josie and Susie Williams. Susie passed away shortly after Dorothy was born. After her mother’s death, she was cared for by her grandmother Nannie Thomason. Dorothy grew up in a small town. During her elementary years, she attended a one-room school with children from kindergarten to the eighth grades. Dorothy attended Ed Davis High School in Georgetown, Kentucky, where she met her sweetheart John Butler. Upon graduating from high school in 1942, Dorothy attended Kentucky State College (now known as Kentucky State University) in Frankfort, Kentucky and John attended Lexington School of Engineering until he was drafted into the United States Navy. Nannie was determined to provide Dorothy with an opportunity to obtain a college degree. Along with farming, Nannie worked domestically, where she would clean houses and wash clothes to afford Dorothy’s college tuition. Dorothy graduated cum laude with a Bachelor of Arts Degree, and memberships in the Alpha Kappa Mu Honor Society and Zeta Phi Beta Sorority, Zeta Nu Chapter. After graduation, she was offered a teaching position in Inkster, Michigan. John had recently returned from World War II. They were again reunited and married on June 6, 1946 in Georgetown, Kentucky. Together, they relocated to Michigan in 1947. Dorothy taught fourth grade corrective reading at the Douglass Elementary School in the Inkster Public School District from 1947 to 1971. In addition to her roles as Wife, Mother and Teacher, she was active in many religious endeavors. Dorothy was a charter member of Gethsemane Baptist Church of Westland, Michigan, where she remained a member until her passing. Her roles at Gethsemane consisted of but was not limited to Director of Christian Education, Church School Teacher, and the Mothers’ Board. In conjunction with her religious activities, she was a member of various charitable, civic, and musical organizations. These included The Goodwill Community Youth Group and The Community Youth Ensemble, which were founded to help young residents who lived in Detroit. She was also a member of the National Gospel Choirs and Choruses and Michigan District Uplift. Dorothy had a long successful and fulfilling career as an educator but felt a higher calling. In 1971, Dorothy resigned her tenure position with the Inkster Public School District to pursue a career in the Home Missions Services and Evangelism. She was ordained as a Baptist Minister but preferred to be known as an Evangelist. Dorothy knew she was called to preach the gospel of Jesus Christ but did not wish to be confined to supervision over only a portion of the flock. She desired to be free to travel from place to place letting people know about the love of God and His plan for their salvation through Jesus Christ. Evangelist Dorothy Butler was a prolific writer of poems and prayers. She was also an accomplished song writer. She was a dedicated servant of God and attributed her writing abilities to being called by God to be an instrument of praise. Her prophetic writings have been distributed in the form of books, pamphlets, framed/laminated plaques, sheet music, audio tapes, and CDs. They have brought comfort, hope, guidance, and inspiration to all. Time and the present coronavirus pandemic slowed her body and dimmed her mind, but she remained a dedicated servant of God. Her writings have been dormant for some time, but she continued to praise God every day. She produced a treasure trove of writings, many of which are presently unpublished. It was her hope that more of them will be shared with the world. On March 7, 2021, Dorothy peacefully made her transition from this life to the next. She fought a good fight, stayed the course, met her goal to see her Savior face to face, and reap her rewards in Heaven. Dorothy was preceded in death by her parents Josie and Susie Williams, Grandmother Nannie Thomason, and her husband Deacon John Butler. She leaves to cherish in her memory one sister in-law Phyllis (William); two sons; Ronald (Juanita) and Donald (Maxine); seven grandchildren: Keith, Kendall, Frederick, RonSher (William), Latonya, Jennifer, Joshua; 10 great-grandchildren: Robert, Dujuan, Emanuel (Ashley), Andre, Olivia, Madison, Denzel, Lauren, Jordan, and Kennedy; two great-great grandsons: Arthur and Anthony; and a host of nieces, nephews, cousins, and friends.

Dorothy Mae Williams was born on May 19, 1924 in Stamping Ground, Kentucky, to the parents of Josie and Susie Williams. Susie passed away shortly after Dorothy was born. After her mother&#8217;s death, she was cared for by her grandmother... View Obituary & Service Information

The family of Dorothy Butler created this Life Tributes page to make it easy to share your memories.

Send flowers to the Butler family.