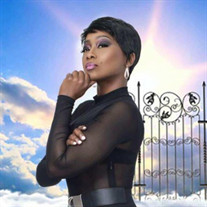 Diane LeTice Orr was born November 26, 1970, in Wayne Michigan to Vera Ann Hix and Lee Rochell. She was the fourth child born to them. Diane was very close to her stepfather Richard Hix who she fondly referred to as "My Dad". Diane accepted... View Obituary & Service Information

The family of Diane Le-Tice Orr created this Life Tributes page to make it easy to share your memories.

Send flowers to the Orr family.