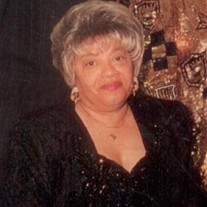 Della Pearl Broadnax, the eldest of three children born to the union of Annie Mae and William T. Broadnax Sr. gazed upon her first sunrise on January 2, 1932 in Russell County, Alabama. She peacefully transitioned from time to eternity on November 25, 2019, following a protracted illness. Della Pearl was so anchored in the church, that as a child, Liberty Hill Baptist was like a second home. Her father was a Deacon and later became the Sunday School Superintendent, while her mother was a dedicated member of the Usher Board. There, at an early age, Della Pearl accepted Christ as her personal Savior. She matriculated at segregated public schools in Russell County. Like her mother, she was trained as a silk finisher and worked primarily in the direct care profession. She also became an accomplished cook, who according to her eponymous granddaughter "could make garbage taste good." Della Pearl passed her culinary skills on to 2 of her 3 daughters. Her specialties included peach cobbler, banana pudding, bread pudding, fried catfish, and potato salad. In other words, Della Pearl could throw down. Strikingly beautiful, and somewhat shy, Della Pearl married and met Willie A. James, an aspiring physician who was attending Morris Brown College. It was said that they had the biggest wedding that Phenix City and Liberty Hill Baptist Church had ever seen. Five children were born to their union. Eleven months after their wedding, Olivia was born. Willie James withdrew from Morris Brown College, and they left the South, migrating north to Inkster, Michigan. Initially, Della Pearl united with Mt. Olive Baptist Church in Romulus, but settled at Womack Temple C.M.E Church, where she served for nearly 60 years. An accomplished contralto, she sang in the gospel choir. She also taught Sunday School, joined the Mother's Board, Missionary Society, and Usher Board. Continuing the legacy of her mother, Della Pearl was a faithful gatekeeper for decades until her health failed. As a missionary, she called and visited the sick. At the conclusion of every visit, she recited her favorite scripture, the 23rd Psalm. She trained her children in the way they should go, and took, rather than sent, them to Sunday School and Church. She loved dressing in her Sunday best, and was well known for her collection of fancy hats. Sister Della Pearl relished supporting her children, grandchildren, and great-grandchildren in their endeavors. But, she also enjoyed traveling to destinations such as Paris, Rome, Venice, the United Kingdom, the French Riviera, Vancouver, Hawaii, Mexico, throughout the United States and Caribbean. Della Pearl lived the old spiritual, "when you hear of my homegoing, don't worry about me." She was preceded to eternity by her parents; her sister, Rosa Mae French Cummings; her youngest son Darryl James; both husbands, Willie A. James and William Riley; and one granddaughter Natalie Williams. She leaves to cherish her memory: her children, Olivia Bradley, Loretta James-Walker (and her husband Samuel Walker), Sylvia James, and Cornelius James; a loving brother, William T. Broadnax Jr., of New York; a special granddaughter Alexxiss Jackson (for whom she fundamentally served as a third parent); 16 grandchildren, Nicol (Edward), Della, Jenny, Tiffany, LaShawna, Antoinette, Willie, Cornelius Jr. (LaTeese), Devron, Meghan, Thomas, Joshua, Brian W., Brian H., Leonette, and Timothy; 22 great-grandchildren; 2 great-great-grandchildren, including Savannah, who checked on her religiously; a special son-in-law, Thomas Jackson; an irreplaceable daughter, Renau Grays; godchildren Sharon McPhail and Bryant Thomas; stepson Ibahim Beyah (Patricia); 3 nephews, Rodney (Twiler), Johnny, and Clarence; and a host of nieces, nephews, cousins, other relatives and friends.

Della Pearl Broadnax, the eldest of three children born to the union of Annie Mae and William T. Broadnax Sr. gazed upon her first sunrise on January 2, 1932 in Russell County, Alabama. She peacefully transitioned from time to eternity on November... View Obituary & Service Information

The family of Della Riley created this Life Tributes page to make it easy to share your memories.

Della Pearl Broadnax, the eldest of three children born to the...

Send flowers to the Riley family.