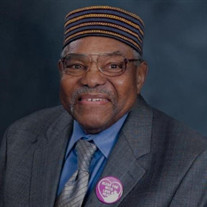 David Walker Perkins Sr. was born on April 9, 1921to Temple to Toney and William Blake Perkins in Muscle Shoals, Alabama. He was the third of five children born to this union. The family moved to Detroit for a short time during David's childhood, however later returned to Alabama's cotton fields allowing him time to only attend school two days a week. He left home at age 17 to join his brother Alex in Inkster, Michigan where he arrived on his 18th birthday with only an 8th grade education. In 1941, after volunteering with the Civilian Conservation (CC) Camps, he elected to join the ranks of the United States Coast Guard. He served for 6 years during World War II completing 36 consecutive months active sea duty. David's ship was hit three times causing he and his crewmates to abandon ship each time. David was honorably discharged in 1947. Following his discharge from the military in California, he returned to Inkster, Michigan where he began working for Ford Motor Company from 1947 until his retirement in 1978. As an active retiree, David held a part-time position with Penn Funeral Home for 21 years and served with Local 600 as an Executive Board member protecting the rights of retirees. In 1950, David met and married he first love of his life. Ms. Evangeline Davis, and to that union six children were born. After 10 loving years of marriage, and following the birth of their last child, Gerald, she passed away on November 4, 1960. David raised his children with the love and support of his sister-in-law and other relatives. In 1985, David was reintroduced to love and married the second love of his life, Ms. Ernestine Hayes. he told her that his name was Sug and asked if she would be his Sugar Baby they remained married for the next 30 years until her passing in 2015. After being married for only a few months, Sugar Baby helped with the care of his ailing son, which never left his heart. The two shared many great memories of family gatherings and travels across the U.S. Along with being a loving husband, father, and 32nd degree Grand Mason, David. was an avid Bid Whist and Dominos player , and could beat the best of them. David accepted Christ as his Lord and Savior as a boy in 1935 and remained strong in his faith and attendance under the direction of Rev. Alfred Davis of First Baptist Church of Canton where he remained in good standing until his passing. He leaves to celebrate his life both through birth and marriage, his children David Jr. (Flora), William, Regina, Angela, and Stephen. His children through marriage: Elis (Terry), Gregory, Valerie, Everett (Charlotte), Elizabeth, (Tony), and Freeman. Sister-in-laws: Edmonia Goldston, Mary Duncan, a host of grand and great-grandchildren, nieces, nephews, friends, and neighbors of the Fountains of Franklin where he resided for the last eight years of his life. He was preceded in death by both wives, Evangeline Perkins and Ernestine Hayes-Perkins,; his children Gerald, Beverly, Jesse, and Michael; and siblings, Alex, Janie B., Henry Ford, and Vincent.

David Walker Perkins Sr. was born on April 9, 1921to Temple to Toney and William Blake Perkins in Muscle Shoals, Alabama. He was the third of five children born to this union. The family moved to Detroit for a short time during David's childhood,... View Obituary & Service Information

The family of David Walker Perkins created this Life Tributes page to make it easy to share your memories.

Send flowers to the Perkins family.