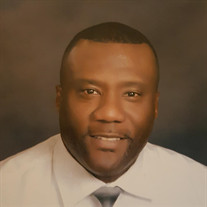 The Governor of Michigan advises to limit public gatherings for funerals to 10 guests or less to prevent the spread of COVID-19. Chapel of the Chimes Funeral Home-Westland carefully considered this recommendation and ask that additional guest please participate via live-streaming if it is authorized by the family. Rev. David Michael Holifield was born on October 22,1962 in Wayne, Michigan to Crofford and Vivian Holifield. David's father preceded him in death. He was the elder of two siblings. David received him primary and secondary education from Romulus Community School, participating in sports throughout and earning distinction for an impressive vertical leap and a smooth, left-handed jump shot. He completed his secondary education in 1982. In January 1971, he confessed Christ at Chapel Hill Baptist Church in Detroit, under the pastorage of the late Rev. Roy A. Allen, Sr. Reared in Romulus, Michigan, in the home of his grandparents, Rev. Lieutenant B. Campbell, Sr. and Exer L. Campbell, David often fondly spoke of the inspiration he-along with his brother, Johnathan, and cousin Rev. Julie Price, William Price, Jr. and Jeffrey Price - received from Rev. Campbell's daily rituals of studying Holy Scripture and practicing sermons. David accepted the call to minister the Gospel of Christ later in life. He was licensed and ordained by Rev. Dr. Charles G. Adams, Hartford Memorial Baptist Church. Ove the course of his ministry, David quickly gained a reputation as a deeper thinker and powerful, stirring orator, with a thunderous voice. He continued his theological growth and education at the Ecumenical Theological Seminary in Detroit. Proud of his career as an addiction prevention specialist and recovery coach, David enjoyed working with the Detroit Association of Black Organizations, Detroit Rescue Mission Ministries and National Council on Alcohol and Drug Dependence - Greater Detroit Area. David departed this life on June 26,2020 and is survived by his mother Vivian Holifield; brother Johnathan Holifield; sister-in-law Antoinette Holifield; aunts, Evelyn Price, Betty Campbell, Cynthia Riley and Jean Price; uncles James Price, Sr. William Price Sr. and John Robert Holifield; an a deep well of cousins, other relatives and friends. While enduring struggles and hardships familiar to many, the driving force of David's life was his absolute belief in Christ. He believed in the transformative power of the Gospels for not only his life, but also the lives of other people and any Believer. May he rest in preace. It is finished.

The Governor of Michigan advises to limit public gatherings for funerals to 10 guests or less to prevent the spread of COVID-19. Chapel of the Chimes Funeral Home-Westland carefully considered this recommendation and ask that additional guest... View Obituary & Service Information

The family of Rev. David Michael Holifield created this Life Tributes page to make it easy to share your memories.

The Governor of Michigan advises to limit public gatherings for...

Send flowers to the Holifield family.