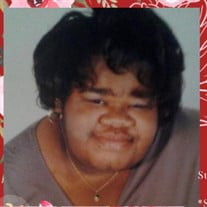 November 15, 1992 was such a happy day for the late Stephen and Annette Beatrice Daniels Kennedy. This day would mark a long awaited and anticipated celebration of life at Oakwood Main in Dearborn. They welcomed their sweet daughter, Danielle Celeste into their life and home. She would be the baby girl of the family. She was proceeded in death by mother and father. Danny attended schools in the Crestwood School district in Inkster graduating from Crestwood High School in 2012. Danny was raised in the church and openly confessed and accepted Christ as her Lord and Savior at a young age. Danny was a member of Christ Temple Church of Westland under Suffragan Bishop Luke A. McClendon, Jr. She loved church and all that went with it. Danny worked in the kitchen along side of her mother, father and two sisters, Deville and Lakeisha. She liked to sell baked goods at the church as well. One of her favorite places at church was the choir stand as a member of the Christ Temple choir. Danny worked in a program with individuals who were blind located in Inkster. She loved animals and worked for a while at the Muddy Pups in Westland. Danny was a Daddy's girl. After the loss of her mother at the age of 8 years old she was even closer to her dad. She left this world to meet with hi, again on his birthday August 3rd. Danny had such a joy for life. She loved her family and especially her sisters, Deville and LaKeisha. She was a devoted sister, and loyal friend. She opened her heart and poured out unmeasurable love for family friends and even strangers. She gave what she had whether she had it to give or not. She had a no-fear attitude, was loyal to family and was actively involved with her family until her health began to suddenly decline. Rarely did you ever see her down. She just didn't let negativity diminish her shine! She always had a smile and laughter could be heard where she was. She has left us with precious memories of her sweet personality. A special thank you to Deville and LaKeisha for all the love and care you provided to Danny not only recently, but down through the years. Thank you also to cousins Jeanine Washington, Naomi C. (Missy) Kennedy and Stephanie Kinney for stepping in additionally to add support. God bless you all! Danny answered her call from labor to reward on August 3, 2021 at 3:30 a.m. at Beaumont Hospital, in Farmington Hills, MI. Danielle leaves to cherish her memory: two sisters, Deville Rashon-Anette Kennedy, Houston, TX, and LaKeisha Kennedy, Belleville, MI; Aunt Ellen Kennedy Inkster, MI; Uncle Aaron (Carol) Daniels, Inkster, MI; Great uncles, Paul Kennedy (Victoria), West Bloomfield, MI, Micah Kennedy (Loraine), Inkster, MI Timothy Kennedy, Inkster, MI; Great aunts Naomi Kennedy, Romulus, MI and Ruth McRae (Philip) Taylor, MI; Nieces and Nephews, Taylor Dozier, Nemya Freeman, Dereon Parks, Kiera Goldston, and Kareem Kindell; and a hosts of Saints and extended family and friends.

November 15, 1992 was such a happy day for the late Stephen and Annette Beatrice Daniels Kennedy. This day would mark a long awaited and anticipated celebration of life at Oakwood Main in Dearborn. They welcomed their sweet daughter, Danielle... View Obituary & Service Information

The family of Danielle Celeste Kennedy created this Life Tributes page to make it easy to share your memories.

Send flowers to the Kennedy family.