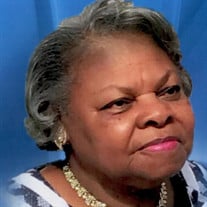 Daisey Geraldine Cranford (Gerri) was born on August 5,1938 in Meridian, Mississippi to Luther and Earline Arrington, Sr. The family later moved to Detroit, Michigan and then later to Willow Run, Michigan where she graduated from Willlow Run High School. She was class president and queen deutante. Daisey met the love of her life John Henry Cranford (JC) when they were teenages. They were joined in holy matrimony November 9, 1956. John later enlisted in the United Stated Air Force, where he served for 20 years. This gave Daisey the opportunity to travel around the world, which she truly enjoyed. The family moved to Cincinnati, Ohio in 1978 where she started her career at K-Mart. She truly enjoyed working there and assisting customers. After retiring from K-Mart, she went on to work at the Salvation Army. People all over the town would recognize her as the lady from the Salvation Army and always wanted to say hi and ask how she was doing. Daisey was loved by everyone whose life she touched. She will be truly missed. Some of her favorite hobbies were bingo, bowling and spending time with her family. Daisey was known forher skirts and booby socks. John dignosed with cancer in 1976 at the age 37. After their daughter, Jackie graduated from high school in 1981, John and Daisey moved to Inkster to be closer to family. Especially his beloved mother, Nettie Tatum. Sadly John lost his battle a few months later. Daisey was baptized as a Jehovah Witness on November 4,2018. She loved going to the Hall and being around her friends, they wee another family to her. Daisey we preceded in death by her parents, Luther and Earline Arrington, Sr., her brother, Luther Jr. and her sisters Ruthie and Betty and her beloved husband, John. She leaves to cherish her life four children, Leslie Hampton, Vincent Cranford, Russell (Monica) Cranford and Jacqueline (David) Harris. One sister Dorothy Arrington, two brothers, James Arrington and Johnny Arrington. Six grandchildren.

Daisey Geraldine Cranford (Gerri) was born on August 5,1938 in Meridian, Mississippi to Luther and Earline Arrington, Sr. The family later moved to Detroit, Michigan and then later to Willow Run, Michigan where she graduated from Willlow Run... View Obituary & Service Information

The family of Daisey Cranford created this Life Tributes page to make it easy to share your memories.

Send flowers to the Cranford family.