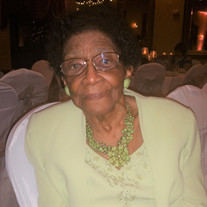 Mother Creasie White, long time resident of Inkster and Westland Michigan peacefully aged away on Saturday, September 21, 2019 in the comfort of her home. Mother Creasie was born November 29, 1920 in Aberdeen, MS she was the youngest of 3 children born to Johnnie and Elnora (Roseburgh) Gladney. Johnnie was a sharecropper on a cotton plantation. Elnora passed away when Creasie was 11 years old and her father moved the family to Fitzugh, AK. In short order, her father remarried and Creasie was raised by her stepmother (Mary). As a freshman in high school, Mother Creasie was a vibrant student who excelled as a (lone female member) champion sprinter on the school's track team. She met and fell in love with a handsome young man named Charles Auston White in the late 1930's. The love was mutual and Creasie and Charles eloped and were married in April 1940. They were a model loving couple and had 3 children (Nora, Charles Jr., and Ernest) while yet residents of Arkansas. In addition to nursing her own children, Mother Creasie took on the task of caring for Charles' baby sister (Leanne) due to Charles' mother's illness. Charles and Creasie were members of Lake Grove Baptist Church under the late Reverend Willie Wright while living in Arkansas. Charles and Creasie migrated to Inkster, MI in 1946 and immediately joined the Middlebelt Church of God in Christ under the tutilege of Elder Daniel Wade. Two more children (Anderson Louis and Vinzella) were born to them shortly after having relocated. They sought and received the precious gift of the Holy Ghost while tarrying under the late Bishop J. Cartwright in the home of Mother A. Love. They instilled the love of Christ into their children. Mother Creasie was unwavering in encouraging her children to read at every opportunity they had and to strive to be the very best that they could be. Mother Creasie was a faithful Christian and devoted wife to Charles until his untimely death in August 1977. She was a stranger to no one, had a loving, humorous personality, and is known by all of her grandchildren as not being in the running for "babysitting grandma of the year." Many of the grandchildren often reminisce of the time that she took a number of them to McDonald's and ordered 6 or 7 hot dogs to which the grandkids responded "Grandma you can't buy hot dogs at McDonald's". Mother Creasie loved to dress up which included a fancy church hat. She was an avid fan of national politics; she thought a half day of praying and reading her Bible followed by lunch and then a large dose of MSNBC on TV had the makings of a day well spent. Mother Creasie was blessed of God to maintain her physical, emotional, and psychological faculties up to the day of her demise. When she reached age 88 Charles Jr. decided it was time for her to relinquish her drivers license (which she obtained at the age of 59), her response was "you'd better go back home and leave my license alone." Mother Creasie never ceased from praying for he children. She was a faithful member of St. City until her death. In 1954 Mother Creasie learned that she had an uncle, aunts and a host of cousins through her biological mother who resided in Benton Harbor, Michigan. She and Charles took the family to Benton Harbor whereby the reunion was the beginning of a lasting relationship with new found relatives. Mother Creasie's uncle and aunts had not seen her since her father moved the family from Mississippi. Mother Creasie is pre-deceased by her parents and stepmother (Johnnie, Elnora, and Mary Gladney), her husband (Charles Sr.), her siblings (Eddie Gladney and Gertrude Dulin), her son-in-law (Lee Martin Sr.), and her great granddaughter Arielle Johns. She leaves to cherish her legacy 5 children Nora, Charles Jr. (Sandra), Ernest (Sandra), Anderson, and Vinzella Newson; 14 grandchildren: Ronnie (Wendy), Lorenzo (Malisa), Lisa (Shawn) Rich, Lee Jr. (Katrina) Martin, LaTanya (Anthony) Johns, Dionne (Daryl) Williams, Marvin (Shonda) Newson, Kristi (Alvaro) Rodriguez, Andrea (Derwin) Griffin, Dia Martin, Kevin Newson, Charles III, Eddie and Darius, 3 sisters-in-law (Mattie White, Theresa Barker, and Leanne Faine) 32 great and great-great grandchildren, and a host of cousins, nieces, nephews.

Mother Creasie White, long time resident of Inkster and Westland Michigan peacefully aged away on Saturday, September 21, 2019 in the comfort of her home. Mother Creasie was born November 29, 1920 in Aberdeen, MS she was the youngest of 3... View Obituary & Service Information

The family of Creasie White created this Life Tributes page to make it easy to share your memories.

Send flowers to the White family.