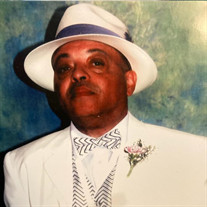 Finally "a boy", Cornelius Alfred James, the fourth of five children born to the union of Della Pearl Broadnax James and Willie Alfred James, made his firest public appearance on June 11, 1955 in Ypsilanti, Michigan. He transitioned from tme to eternity on April 11,2021. A mighty, mighty Viking, Cornelius matriculated at Inkster Public Schools and graduated from Inkster High School in 1973. He was later honored to serve as an elected member of the Inkster Board of Education. As a student, his primary extracurricular activity was playing football. Al lifelong sports enthusiast, as a young lad, he played on the "Bingo Long Traveling All Star Baseball Team." He greatly enjoyed playing sports,hanging out with "the fellas", shooting marbles (tearing up the knees of his pants) and doing "boy" things. While his sisters toild away washing dishes and doing household chores, his beloved Mother, who becames his greatest confidant, allowed him to "just chill". Following graduation form the big IH, he attended Grand Valley State University for a year or so before the prospect of immediate remuneration at Ford Motor Company lured him from educational pursuits. Cornelius met, fell in love and later married Bridgette Williams, who had a wonderful young son named Brian. To their union 6 children were born: Cornelius, Natalie, Devron, Meghan, Thomas and Joshua. He and Bridgette were subsequently divorced but remained lifelong friends. He was also privileged to be married to Karalyn James for a period. After all of his children were grown and upon his retirement from Ford, his desire to finish what he started was re-ignited. He resumed hisquest for higher learning, first obtaining an Associate Degree from Henry Ford Community College, followed by a Bachelor's degree from the University of Michigan-Dearborn. His parents believing in the mandate to "train up a child in the way that he should go," Cornelius united with Womack Temple C.M.E. Church, Inkster. He attended Sunday School and Church services religiously. Back in the day, attendance wasn't optional. If he didn't go to church, he could forget going anywhere else because it wasnt't going to happen. As an adult, he studied as a Jehovah's Witness for many years, before returning to his spiritual roots a Womack, wher he remained until his home-going. There, he served as a Steward, Assistant Superintendent of Sunday School, and in the choir. Cornelius,Sr. was preceded to eternity by: by his parents; his daughter, Natalie; his sister, Olivia; and his brother, Thomas Darryl.

Finally "a boy", Cornelius Alfred James, the fourth of five children born to the union of Della Pearl Broadnax James and Willie Alfred James, made his firest public appearance on June 11, 1955 in Ypsilanti, Michigan. He transitioned from tme... View Obituary & Service Information

The family of Cornelius James created this Life Tributes page to make it easy to share your memories.

Send flowers to the James family.