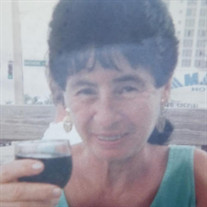 Colette Besnard was born on August 22, 1938 in Fontainebleau, France to father Robert Besnard, mother Antoinette Migliette De Benedetto. Colette was born and raised Catholic. Her early childhood was happy until about 6 years old when she began to endure tragedy when Hitler invaded France. Colette’s family hid in an underground bunker to avoid the Germans and being caught. Her father was killed by the Germans. Colette’s mother could not take the loss of her husband or the trauma from the war for fear of being caught by the Germans. After the war was over, Colette went to stay at a convent and was raised and educated by nuns. While her mother and siblings were separated from her. She remained at the convent until she was 19 years old. Her mother could not raise her anymore because she became mentally unstable due to the devastation of the war. Colette began to search for her brother Maurice and sister Suzette. She was devastated when she could no longer locate her brother for many years, she began to think he passed until he later found her. She was overjoyed to have Maurice and be back in contact with him. She was so devoted to her baby brother and rebuilding their relationship. He was her best friend until the end of her life. Colette left the convent and fell in love with an American soldier Leroy Gilbert. Leroy and Colette married in Fontainebleau France in 1963. He was stationed in Fontainebleau, France during the Vietnam war. They had 2 children Valerie and Anthony there in France. Then moved to the United States relocating themselves at Fort Bragg army base where Joanne was born in 1964. In 1966, Colette and Leroy decided to make Detroit there home. Soon after moving to Detroit, they made a stable home where Jacqueline was born in 1969 and Mireille was born in 1971. Colette did not know how to speak English when coming to the United States in 1964 and had to overcome many challenges due to the language barrier. Colette went through the Nazi invasion in Germany, World War II, and Detroit Riots in July 1967, Martin Luther King, Malcolm X, assinations the black Panthers and John F. Kennedy’s death and witnessed our first black president who she was proud be able to vote for. Colette was strong willed and never cared what people thought of her. People tried to ridicule her for having a black husband and biracial children. Colette didn’t care. She raised and loved her children as a single mom after her husband abandoned her in 1972. She Still didn’t care what people thought. She worked two jobs to support her 5 children. She worked as a nurse’s aide and a maintenance technician throughout her life. She loved to clean. Colette retired in 1995 from Balmoral Condominiums. Colette always held France dear in heart; she often traveled to see her brother Maurice in the south of France and spent time with family and friends of old. She often told us stories of her family and friends. After in life she then moved to Westland and her whole family followed her out in the surrounding areas. She devoted much of her time to her grandchildren and great-grandchildren by babysitting or just spending a lot of time with them. Colette showed off pictures around her home of all her loved ones both back home and here in America. Colette loved to shop at thrift stores and the dollar tree. Her favorite holiday was Christamas. She would go all out for Christmas and decorate her apartment. She was a feisty little lady. She would speak her mind and tell you things about yourself that you couldn’t believe she would say. She would fix her French dishes, especially her French salad with bread that we all love with her signature homemade salad dressing. She loved different French Cheeses and wines. Not long before she passed, we found out Vernors was her favorite Drink. Which we never remembered her drinking pop. She became ill and her children did not want her to reside in a nursing home therefore she was taken care of at home. She passed peacefully with her family at her side. She was one for the holidays and she refused to let go before thanksgiving. Colette was 83 years old when she Ascended to be with the most high. Colette departed this life on November 26, 2021. She was preceded in death by: her father Robert Besnard, mother Antoinette Migliette De Benedetto, sister Suzette Besnard. Colette leaves to cherish her memories: her children Valerie Henderson, Anthony Gilbert, Joanne Gilbert, Jacqueline Gilbert, Mireille Gilbert (Kent), her brother: Maurice De Benedetto, 12 grandchildren: Serge, Antoine (Tammy), Keyanna, Victoria (Jermain), Jasmine, Santez (Lindsay), Joshua, Jayme, Dominique, Alexis, Jalen, Marcelle, 13 great-grandchildren Taira, Breanna, Daequan, Sakkarra, Shareece, Parker, Malachi, Keyshawn, Jeremiah, A’nala, Loran, Savannah, Joelle and a host of nephews, nieces, cousins and friends.

Colette Besnard was born on August 22, 1938 in Fontainebleau, France to father Robert Besnard, mother Antoinette Migliette De Benedetto. Colette was born and raised Catholic. Her early childhood was happy until about 6 years old when she began... View Obituary & Service Information

The family of Colette Edmonson created this Life Tributes page to make it easy to share your memories.

Send flowers to the Edmonson family.