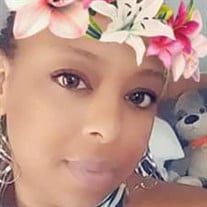 Affectionately known as Chrissy, was born the second to the proud parents of Angela and Darrell Foster Sr. on December 18, 1980 in Wayne. Michigan. Chrissy was definitely a daddy's girl. Chrissy attended both Inkster High School, Inkster Michigan and Robichaud High School, Dearborn Heights, Michigan. She later graduated from Redford High School in June 1999. She excelled academically as well as athletically as for being great at volleyball. After completing high school attended Everest College and obtained a Certification as a Nursing Assistant. Chrissy was a family girl and wonderful mother of her children. She feared God and loved people. She continued her love for people with passion to help anyone. Making sure that those she surrounded herself with would be blessed with her giving. Chrissy found passion in community endeavors, leading her to become the treasurer of the non-profit named, "Change is 4 Change". An organization that supported and supplied meals to the homeless and disenfranchised, Toys for tots, Christmas programs, daycare programs, back-to-school supplies and scholarships and much more. She assisted in starting other chapters in St. Louis, Missouri and in Mississippi. Chrissy also assisted with one other non-profit names Aisha Sisterhood, founded by El Rahim. Chrissy even made time to be a member of a motorcycle club called the "Soul Stars" located in Detroit, Michigan. Chrissy later joined the ranks of General Motors in Pontiac, Michigan. Most recently, while on the picket line along with the Brotherhood/sisterhood local union, she took ill and was rushed to Henry Ford Hospital in Detroit, Michigan. After many medical complications, she lost her battle on October 15, 2019. Christina Mae Foster leaves to cherish her many accomplishments and legacy, children: Marcus McElroy, Jerrell Foster, Ivan McElroy and Krystia McElroy, her loving parents: Angela (Milton) Young and Darrell Sr. (Merci) Young, Siblings; Darrell Foster Jr, Jerme Jones, Ivant Young, John Young, Mannie Young, Dana Foster, LaShawn Young, Diamond Johnson, Sherris Young, Shalonda Williams, Dominique Chapman, and Crystal Jones. One wonderful grandson; Caiden McElroy. A host of close cousins, nieces, nephews, friends, and co-workers.

The family of Christina Mae Foster created this Life Tributes page to make it easy to share your memories.

Affectionately known as Chrissy, was born the second to the proud...

Send flowers to the Foster family.