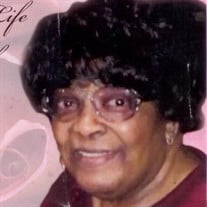 Mother China Harmon was born on May 2, 1945 to the union of Gunn and Viola Jones. China accepted Christ at an early age at Saint John Baptist Church in Drew, Mississippi. She graduated from Hunter High school in 1963 and eventually moved to Gary, Indiana. She later met and married her husband Lawrence Harmon on September 28, 1968 and from their union they had two children. In 1971, she and her husband moved to Detroit, Michigan for better opportunities and to raise their family. China decided to pursue a career in nursing and attended Wayne County Community College where she graduated with RN degree and began a career working at Sinai Hospital eventually transferring to Kingwood Psychiatric Hospital where she was Head Nurse for many years. China worked various private nursing jobs through the years until she retired in 2010. China was a faithful servant of the Lord and attended Anderson Memorial Church (COGIC) for many years before becoming a member at Saint City Church of God in Christ in 1993. Mother China was faithful to the Lord and loved her Saint City Church home, she held various positions such as a Sunday School Teacher, Pastor’s Aid, Usher Board and the Nursing Guild. Mother China favorite pastime was studying her Sunday School lessons, reading the Bible and completing crossword puzzles, and spending time with her grandchildren and great grandchildren. Mother China fought a good fight but the Lord had other plans for her and decided to take her home with him. Mother China leaves to cherish her loving memory: her devoted son, Derrick Harmon (Daaimah); stepdaughter, Shina Boyd (Lewis); stepson, Benjamin Harmon (Jacqueline); goddaughter, Carla Banks (Mekell); one brother, Jesse Jones; sister, Aretha Cooper (Robert Lee); two grandsons, Jameel and DeAndre Harmon; two granddaughters, Imesha Harmon and DejaWilliams; four great-grandchildren, Noah Williams and Essence Clark, Niyah Williams, Kennedi Williams; and a host of nieces, nephews and close family.

Mother China Harmon was born on May 2, 1945 to the union of Gunn and Viola Jones. China accepted Christ at an early age at Saint John Baptist Church in Drew, Mississippi. She graduated from Hunter High school in 1963 and eventually moved to... View Obituary & Service Information

The family of China Mae Harmon created this Life Tributes page to make it easy to share your memories.

Send flowers to the Harmon family.